was the name given to the US Navy's initial nuclear powered ballistic missile launching submarines.  All forty one vessels were the most expensive and most powerful warships ever launched by any nation.  Carrying sixteen Polaris A-1 intercontinental ballistic missiles, these underwater giants could rain death and destruction upon an enemy on a scale once only imagined.  "Mutually Assured Destruction" or "MAD," was the order of the day.  "You bomb me and I'll bomb you to a level from which you'll never recover."  This was the creed behind the US Navy's SSBN fleet.  The submarines, nicknamed "Boomers" came to symbolize all that the Cold War stood for.

This site deals with one of those submarines; the USS Casimir Pulaski (SSBN-633).  The five hundred and fifteenth US Navy submarine and the only US Navy vessel named for a Polish national, Count Casimir Pulaski.  Her motto was "Per Tridentem Libertas" - or peace through seapower, and for thirty years from 1963 to 1993 she patrolled the world's oceans keeping America and her allies safe from the threat of nuclear war.  To quote George Orwell: "we sleep soundly in our beds because rough men stand ready in the night to visit violence on those who would do us harm."  I was one of those men.  I served onboard USS Casimir Pulaski from October 1985 to April 1989.

I am writing a book about the "Pulaski Fish" to glorify her existence and let others know of the sacrifices her crew made daily to keep her at sea, defending her nation.  She served silently, carrying her cargo of sixteen missiles and her one hundred fifty crew to and from patrol after patrol.  If you served onboard the Pulaski I'd like to hear from you.  You can contact me at:  JDM4791@Juno.com.  In the meantime, enjoy your visit to the site.  Be sure to read the OVERVIEW sections and by all means, drop me a line with any questions, compliments, complaints, etc. 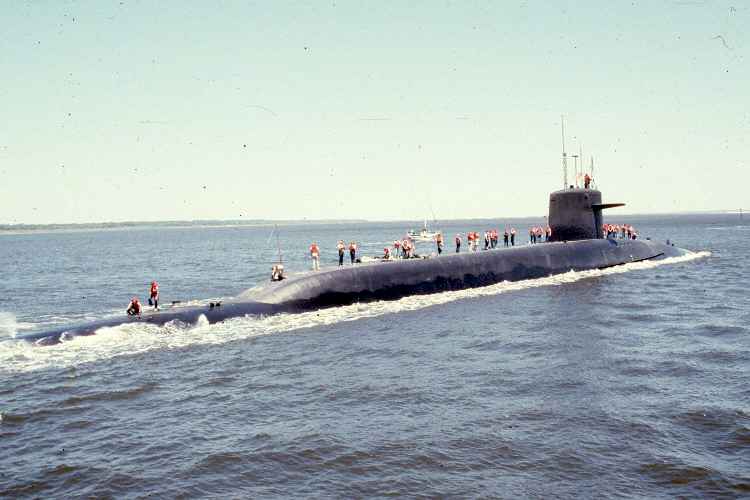 2 December 2020 - If you're new to the Pulaski's web site, WELCOME!  Tons to see and do here.  If you are a former crew member, you now have the ability to add your own photos to the galleries.  HOWEVER - please keep naval security in mind!  Do not upload any photos of the engine room or any place back aft without clearing the photos with me first.  Note that I do not edit the photos; they are as you upload/submit them.  Also note that I don't verify photo ownership; if someone uploads a photo of yours and says they took it, let me know and I'll research as best as I can.  The Pulaski also has a Facebook page so be sure and visit there and say "hi."

A lot of interesting stuff is happening.  Firstly, I hope that all of you are fine and surviving the pandemic/corona/virus nightmares and shenanigans.  The web site's hosting company is changing yet again and although I have paid up for the year (which expires in November of 2021), there is a possibility that they may not honor everything I've done and demand that I change to another format, etc.  I'm a computer geek, so not an immediate nightmare, but it may mean the website goes offline for awhile.  This is all due to take place around late January of next year.  So stay tuned.  Speaking of staying tuned, I have turned off the Guestbook again.  I paid for the "please don't spam me option," but those Russians are damned hell-bent on selling me viagra and cable movies for free.  So I'm gonna wait until the web company moves me to the new hosting site and then I'll see what the Guestbook options are.  So for the meantime, talk to your shipmates on the Pulaski Facebook site.  So bear with us!  Thanks for stopping by.

Content on this website does not reflect the opinions or policy of the US Navy or US Government.  This website deals with a US Navy submarine that served during the Cold War.  All content, images and files submitted to this website become the property of www.usscasimirpulaski.com.  Having said that, I do not mind if you use any of the material on this website for your own purposes.  JUST MAKE SURE that you let the people you're dealing with know that you got the stuff off of this website.  Someone copied several of my photos (which again, I don't mind) to use to make posters to sell.  Well that person did not tell his publisher/seller that the photos were taken by me and next thing I know, I have a lawyer writing me wanting to know why I have "copyrighted stuff on MY website."  I explained that the photos were mine to begin with and we had a good laugh about it, but still...  It could have gotten nasty REAL quickly, eh?  So take what you want but be sure to credit this website as your source.
Sex
Note that this site was written during the time period when only men served on board US Navy submarines.  While female sailors are welcome with open arms, and are presently allowed to serve on board submarines (after qualification), this website and a portion of its content will not be politically correct from a diversification point of view.  From a historical perspective, this is the correct course of action to take and any all-male references and gender assignment assumptions (as well as gender roles) are to be excused.  Your patience is appreciated.