There is only one holiday and one holiday only that is celebrated onboard US Navy submarines.  And that is Halfway Night.  Halfway Night is the time when the patrol is...you guessed it - half way over.  Halfway Nights past are a spirit that haunts many a boomer sailor.  Normally when a sailor settles down with his thoughts and starts to relive his Navy career, the memory of past Halfway Nights usually comes to mind.  The hi-jinx, the humor, the wild antics; it's all there.  Some sailors will remain onboard boats just BECAUSE of Halfway Nights.  Others will leave a boat because of a bad Halfway Night.  This page will contain a collection of photos submitted by various reporters who covered the festivities during a Halfway Night or two.  Where-ever possible, the patrol number and photographer will be given to link the guilty with the evidence.

DISCLAIMER:  Submarines are the domain of adults and men.  So that should be enough to scare any children and squeemish girls away.  Nevertheless, be warned that there may be a photo or two within this page that will bring smiles to others and shouts of disgust to some.  Proceed at your own risk.

Half Way Night Number One

These photographs come to us courtesy of Michael Emerson.  They are from an unknown patrol number.  The crewmembers are anonymous.  Please feel free to send any and all answers in. 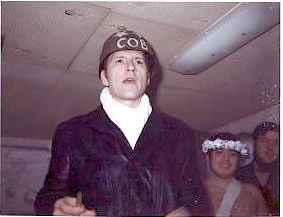 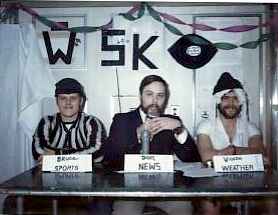 Missile Tech's Bruce Stahl and Don Gunderson give the "sports" and "news" - anyone know who the "weatherman" is?  Thank you to Wendy Gunderson for ID information. 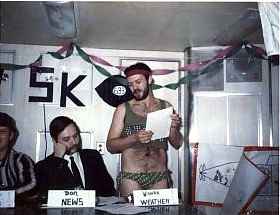 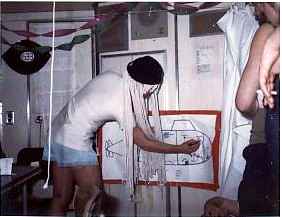 A late 1970's patrol, featuring the musical talents of Torpedoman Don Ward.  Don figures in a lot of photographs from other people, which means we have a large 1970's Gold Crew presence.  These photos are from Don Ward's collection. 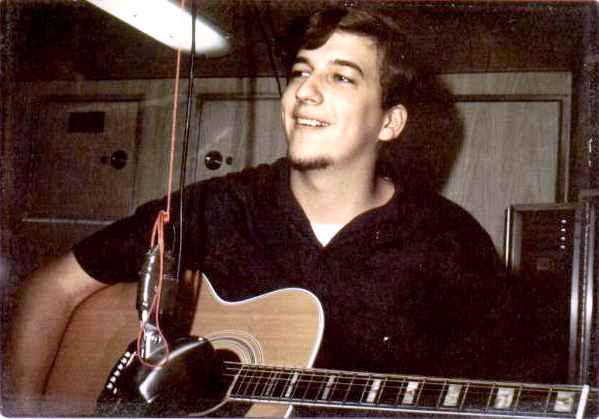 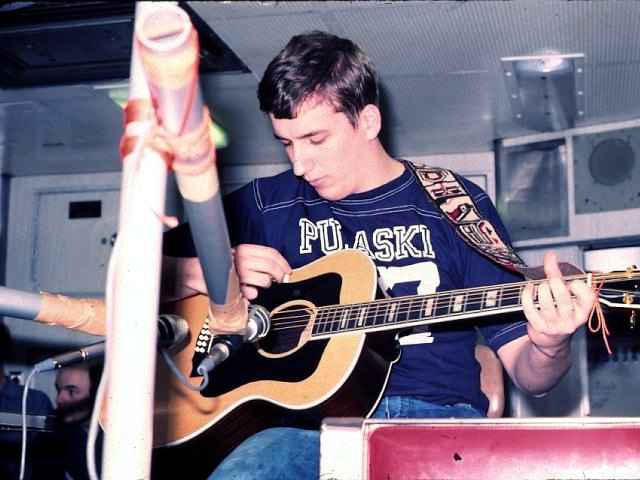 These photos come from the family of Jack Postell who was a torpedoman shipmate of Don Ward's, also from the Gold Crew.  In addition to photos of Don Ward, you'll notice some photos of the other "acts" that were on the bill that night. 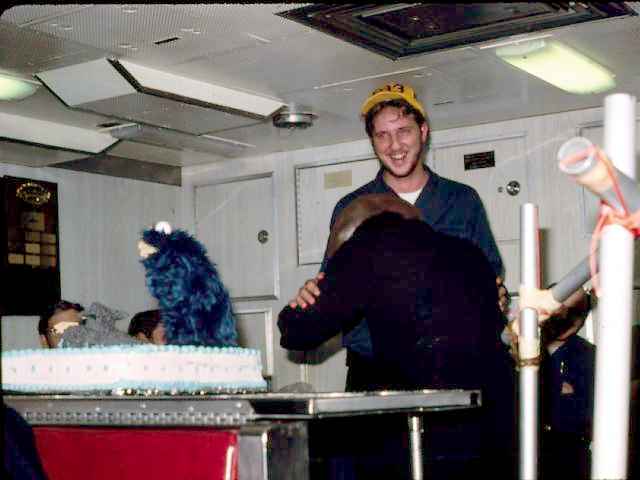 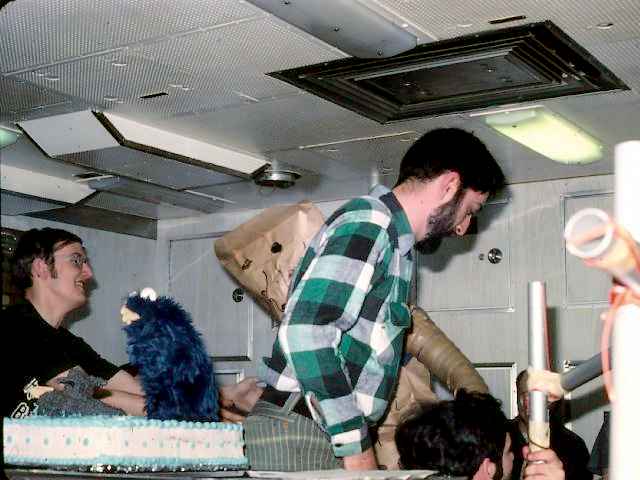 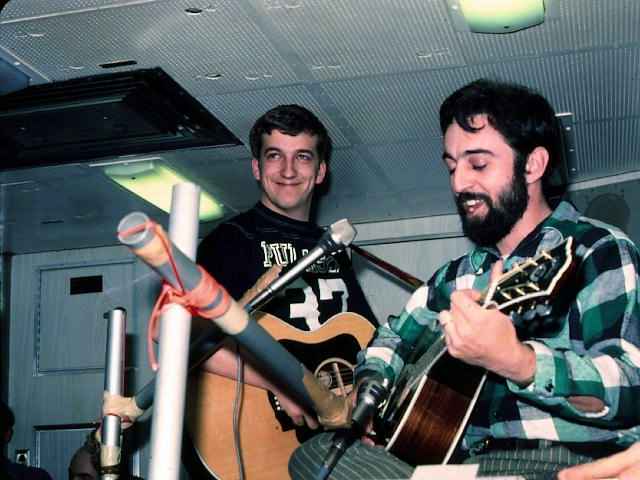 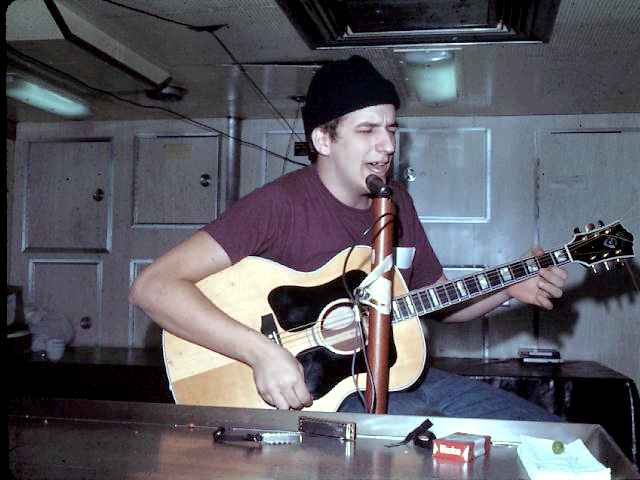 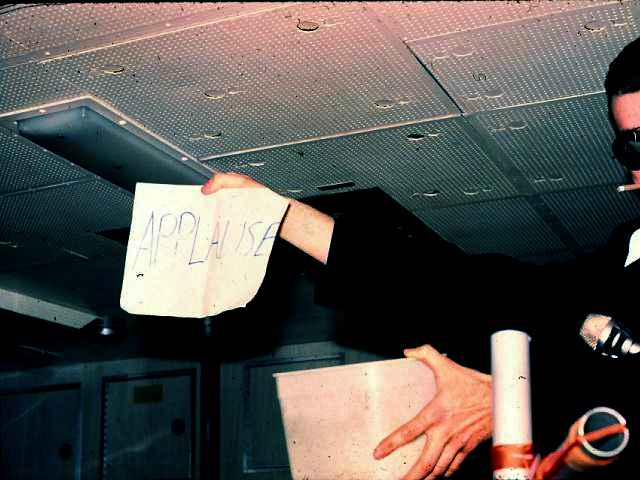 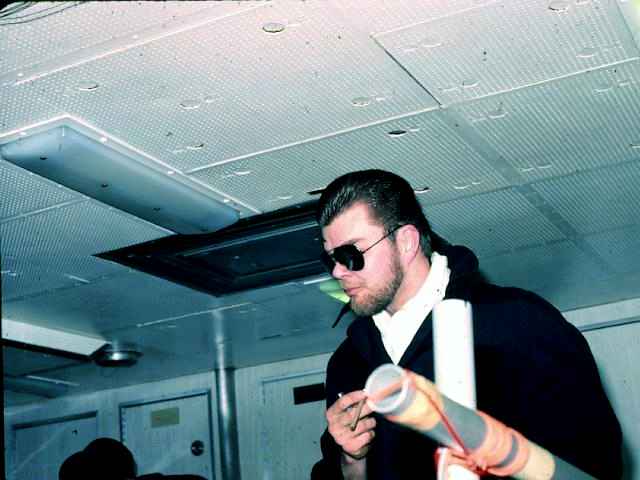 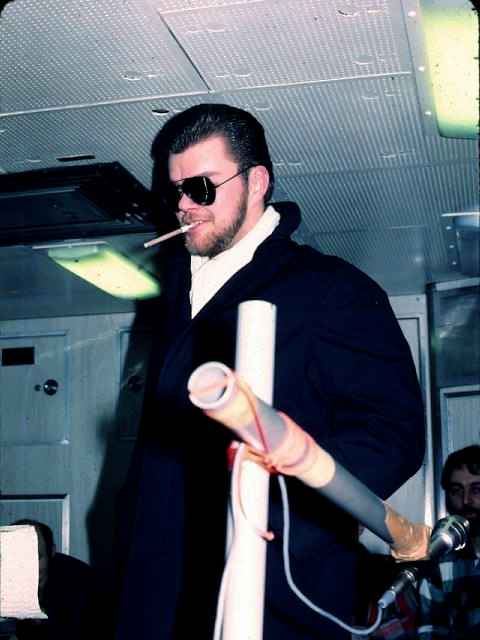 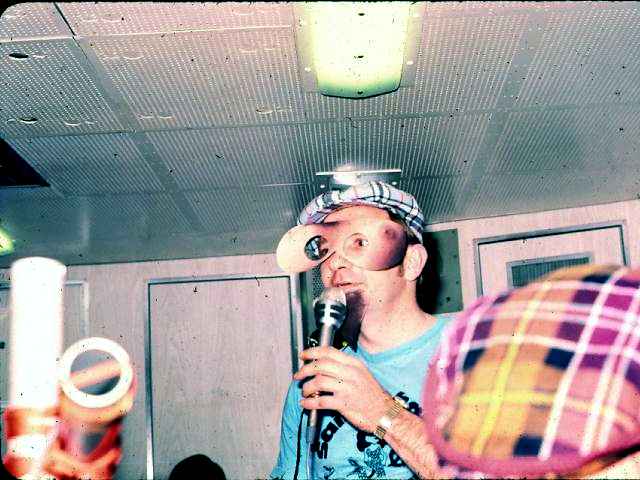 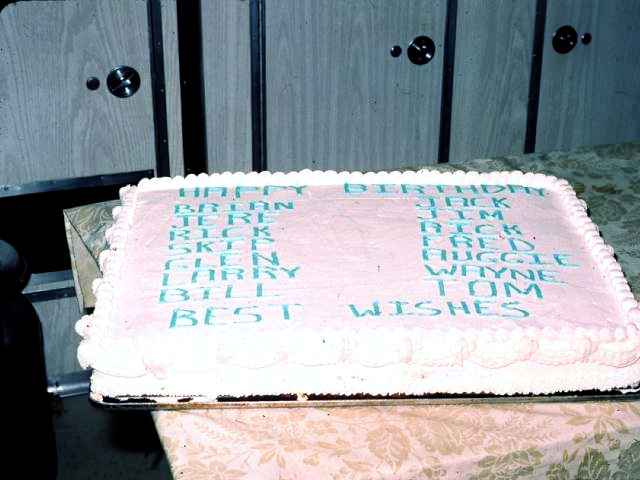 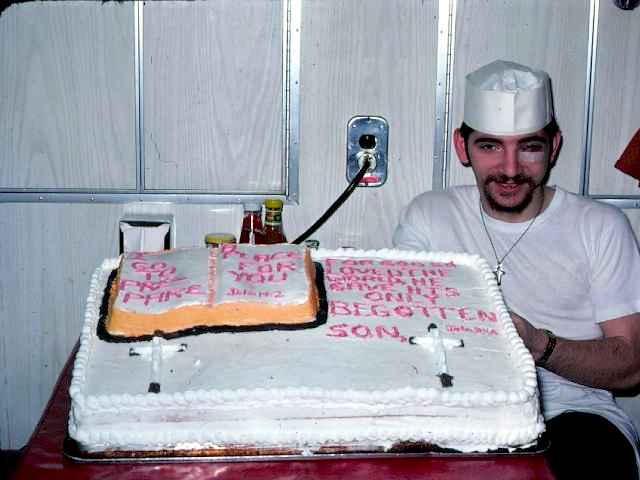 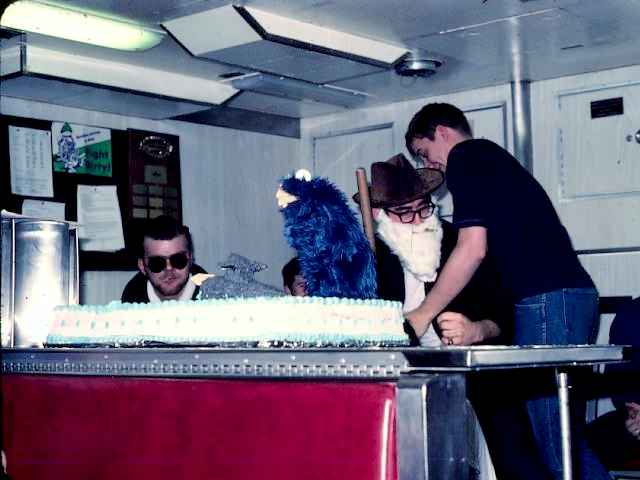 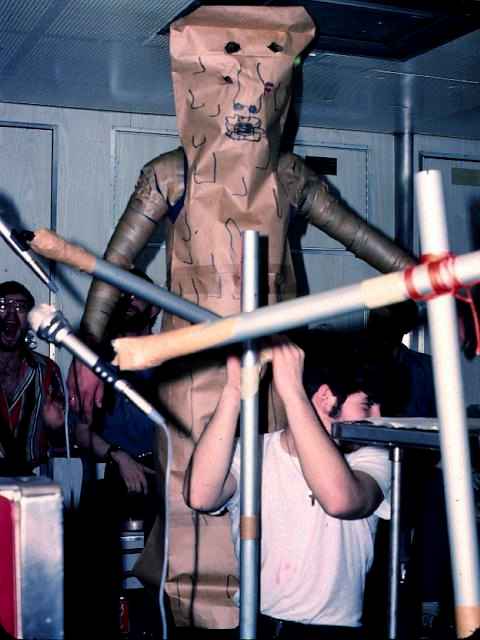 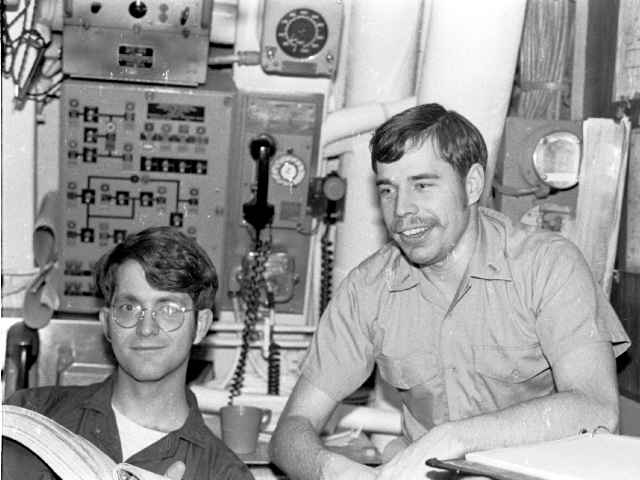 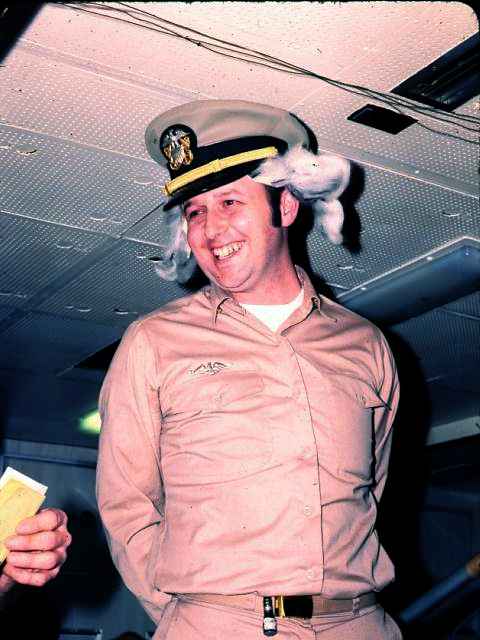 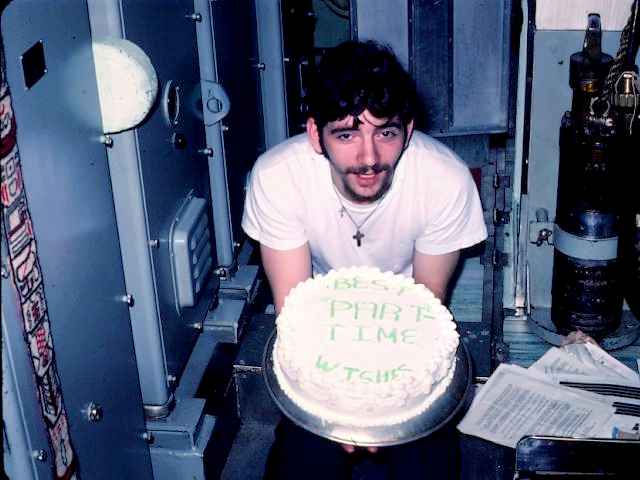 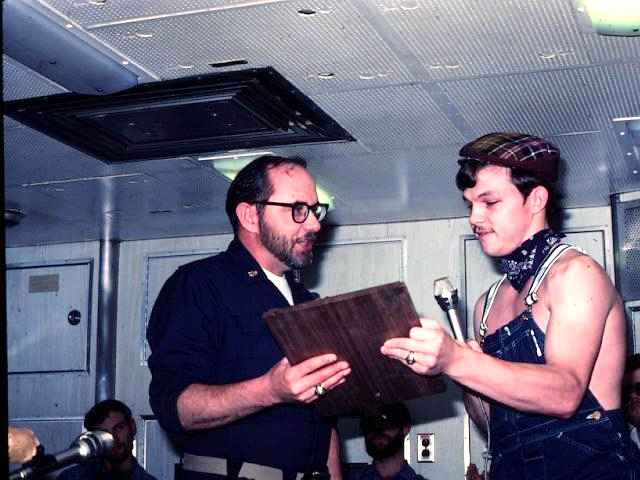 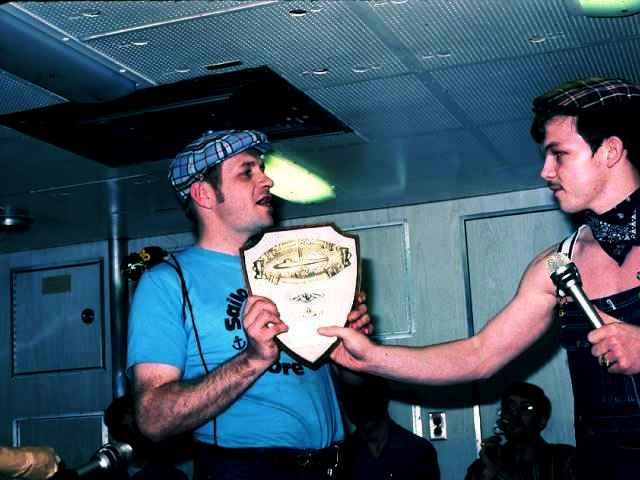 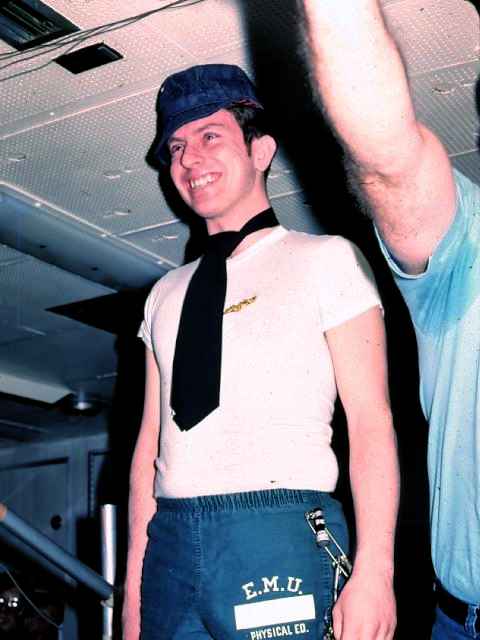 These photos arrive courtesy of Rob Bell who was a Gold Crew FTB during the 1970's to early 1980's.  These photographs are from Patrol 52's Halfway Night.  Here's the A-Weps receiving his wings. 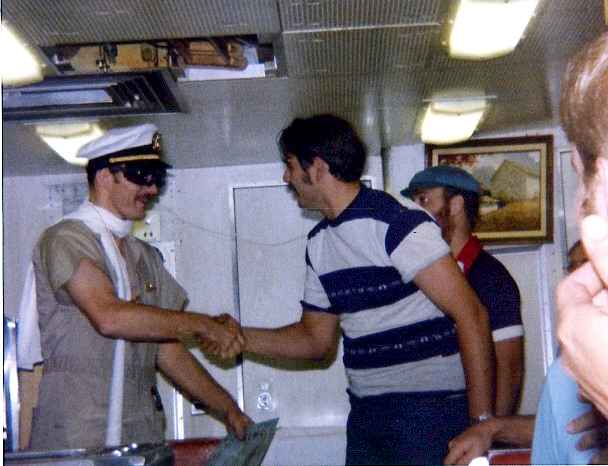 The title of this next one is merely "the eggman."  "The Eggman was the Supply Officer, LT Mark Dozbaba who thought that by drinking a glass full of raw eggs, he could make up for refusing to participate in the "Bluenose" ceremony.  I don't recall if it worked or not..."  Thanks to Don Ward for decoding the legend of "the eggman" to me. 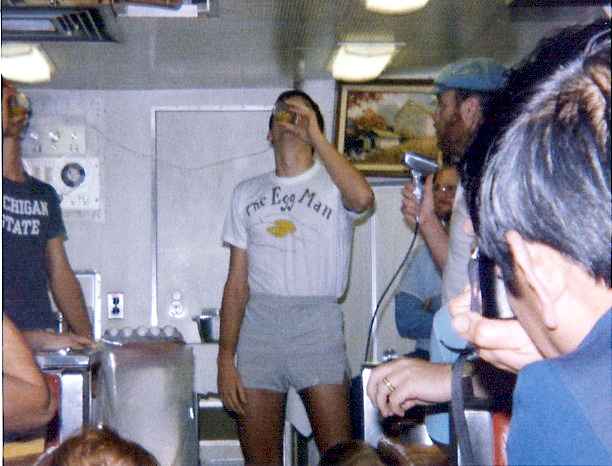 This next one shows a magic act being conducted in the galley. 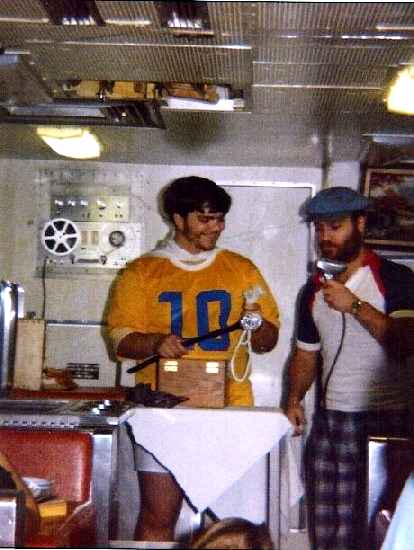 The title for this next shot is "I think my zipper is stuck." 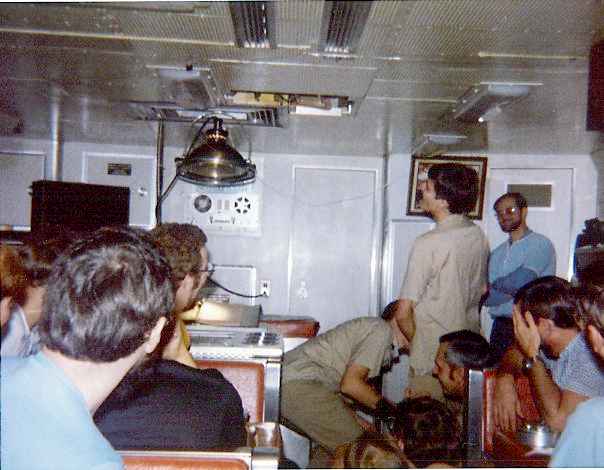 Here's some assorted photographs from the collection of Jim Wynkoop, documenting some of the highly creative costumes that are an integral part of Halfway Night festivities.  Here is a good study of the Weapons Officer (WEPS) in World War One Flying Ace apparell. 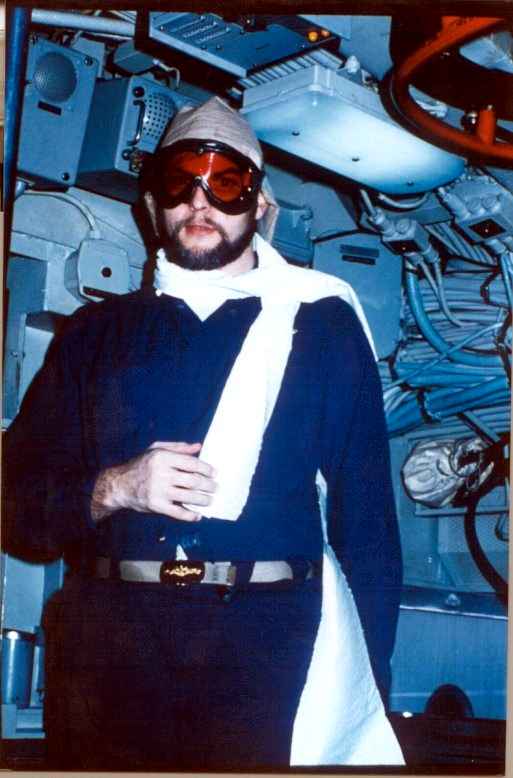 Steam suits are also frequently used for parties (but don't let the Captain know that!) and Halfway Night antics.  The view here is from the Mess Decks. 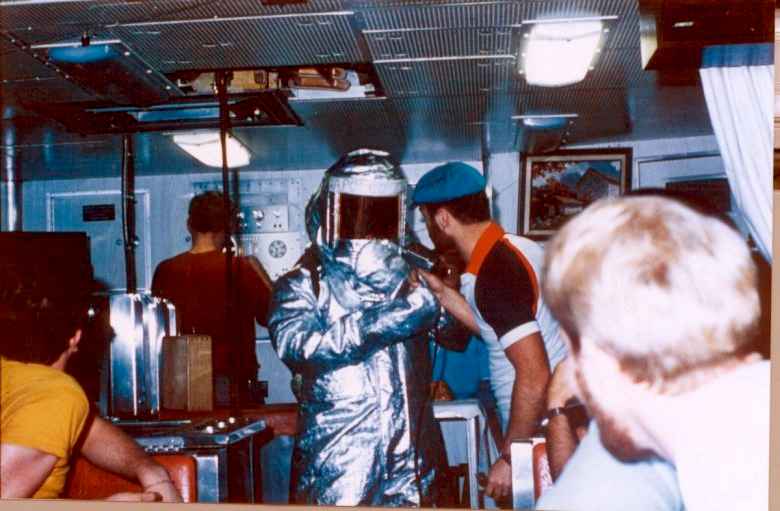