On this page you'll get to take a tour of the CP and see some of her insides.  The USS Casimir Pulaski had three floors, or levels; Upper Level, Middle Level and Lower Level.  We'll try to see as much as we can.  As Ship's Photographer I documented most of the boat, but some areas just never got my attention.  I always laugh when I see submarine movies and they show the crew walking side-by-side down a passageway.  So keep an open mind when viewing the photos!

This is the lowest of the three deck levels onboard SSBN-633.  The lower level's furthest point forward starts at Enlisted Berthing and ends at the Lube Oil Bay.  The majority of these photographs are from the middle 1980's, but crew from all of Pulaski's history have contributed to this section.  Ready?  Let's go and remember to roll those sleeves down and watch your knees - there's loads of items to catch your skin and cause bruises; this is submarine reality - not Hollywood!

Operations Lower Level is the furthest forward that you can go on the lower area.  This is where the main crew berthing is.  Unlike fast attack submarines (SSN's), everyman on an SSBN has an assigned bunk.  They are three-high and you cannot sit up in your bed.  You have a curtain for privacy and at the foot of your bunk is a small locker about the size of a lunch box, for shoes.  Inside your bunk area itself is a laundry bag.  At various points in berthing there are lockers like those at the end of the berthing compartment in this photo. 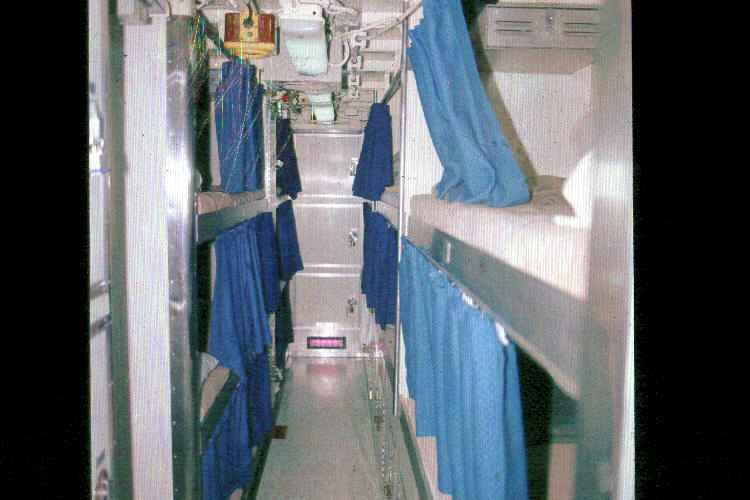 Here's the inside of my bunk.  The control box is for the Sunstrand System.  You plugged your headphones into it and there were channels of all kinds and styles of music.  The key to the system was that unlike your personal Walkman, etc, this system was tied into the ship's alarm system, so if there was a fire, it could interupt your music with the alarm.  There's also an air conditioner vent, a towel rack and of course, photos of your family and loved ones. 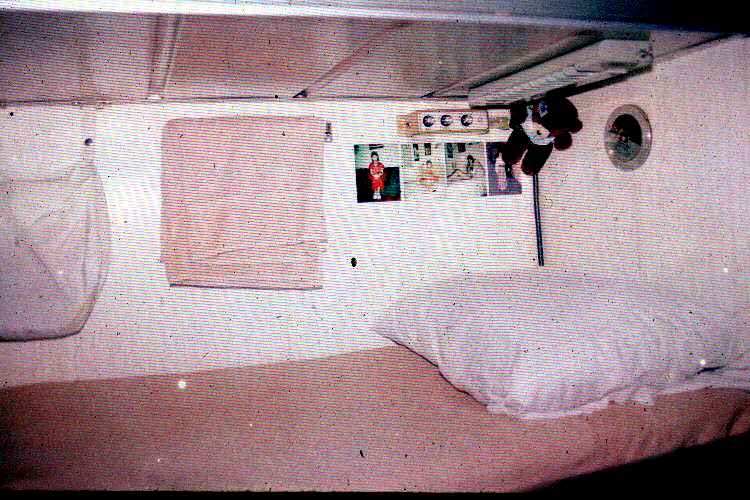 Here, the berthing is illuminated which indicates we are in port.  Here we see my partner in crime, YN2 Mark Shafer getting dressed to go on liberty in front of the lockers.  Each man is assigned a locker which has "just enough room" for everything you must bring on patrol.  Mark was my first barracks roomate. 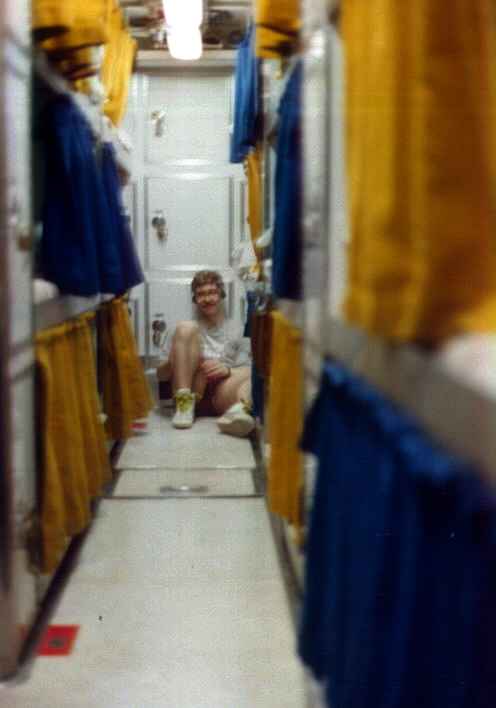 Just outside berthing is the main bathroom (Starboard side) and the stairway to Operations Upper Level.  Here, some of the crew show just how crowded this passageways of the average submarine are.  Note the fire nozzle hanging on the wall and the crew's yellow dosimeters on their belts to measure radiation.  The guys names are a distant memory though the far left is QM3 Mark Forward and the far right is my second (and last) barrack's roomate, STS3 Steve Davis. 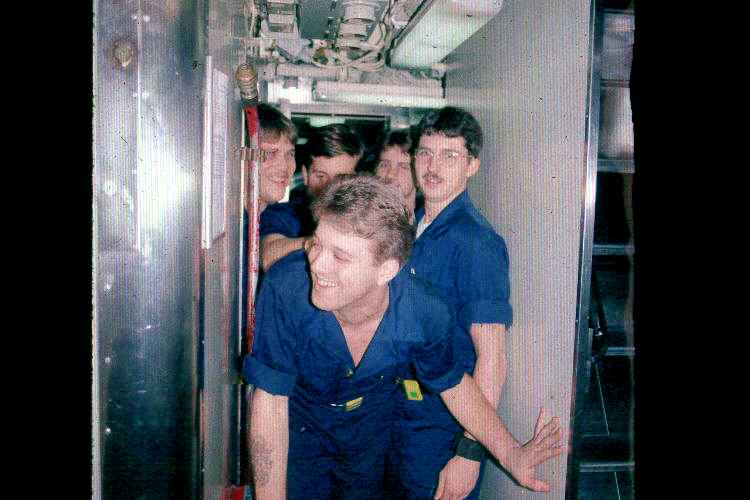 Next, off to the Starboard side is one of the main crew's head (bathroom) which contained showers, sinks and a stall or two.  The brushed stainless steel finish assisted with cleaning.  Frequently, the head was the centerpiece of such activities as haircut day.  Unlike surface ships, submarines do not embark a "trained" barber.  This can be the source of much amusement or pain (photo courtesy of Chuck Jensen)... 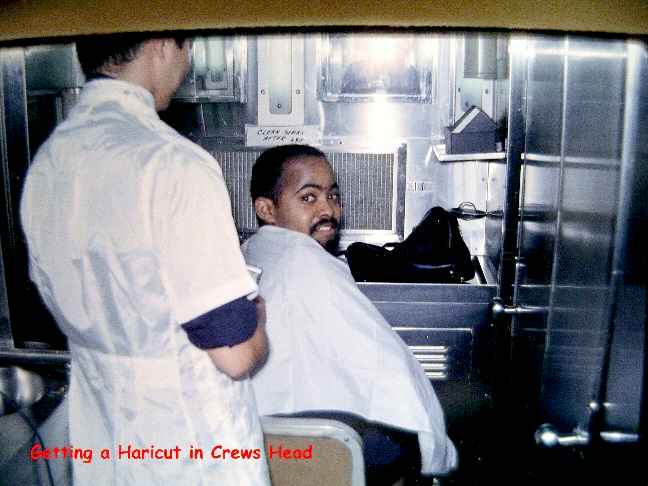 Directly across from the Starboard head was a staircase leading to Operations Middle Level and behind that, on the Port side, another head (without showers) plus the laundry room.  Heading aft on the Starboard side is another small berthing area and underneath that is the Battery Well which is a different room all to itself.   The access hatch to this well is in the Crew's Lounge.  The seperate berthing area was known off and on throughout the Pulaski's life as the LPO Berthing.  Here we see Dave Becker standing outside the berthing door (photo courtesy of Don Durand). 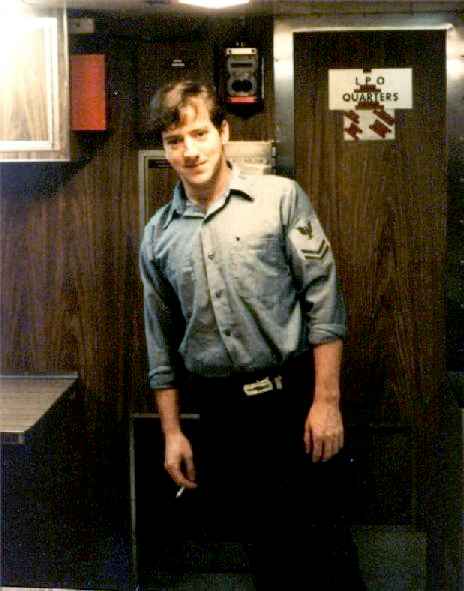 Behind the stairway to Operations Upper Level is the Crew's Lounge which contains a small closet which serves as the boat's library.  The lounge houses the main TV/VCR, so this was the focal point of off-duty gathering.  The TV/VCR is in a locked cabinet when not in use.  The fact that we are wearing Dungaree working uniforms signifies that we are inport as Poop Suits were only authorized for wear underway. 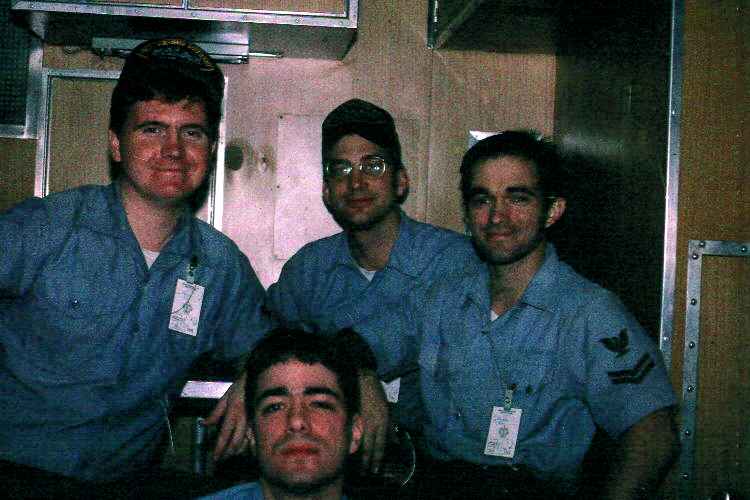 In addition to hair cuts, books and movies, the lounge was, above all, a place to unwind.  Study and cards were major activities.  Numerous tables and benches provided a quiet place to catch up on all those submarine qualifications, testing for the next promotion, or just a college correspondence course.  Here a studious sailor (Herve Cote) catches up on some reading (photo courtesy of Don Durand). 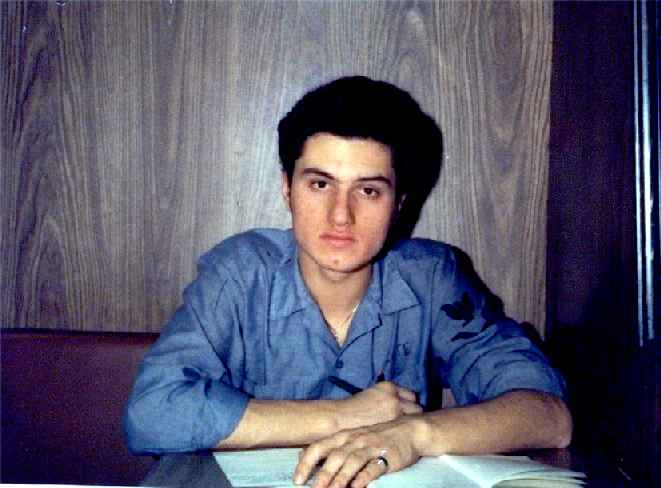 Past the lounge, all the way aft is a stairwell to access Operations Upper Level and a locked door which is the Fire Control Center (FCC).  Here, two watchstanders behind a locked door, man the launch panel that will send missiles on their way to an enemy during time of launch.  Here is a view of the FCC but from the 1970's and also from the Port Side.  The photo's timeframe is from a halfway night celebration as evidenced by the helmet wearing and other "party" gear.  Note also the toilet paper roll and it's holder mounted to the bulkhead (photo courtesy of Jim Wynkoop). 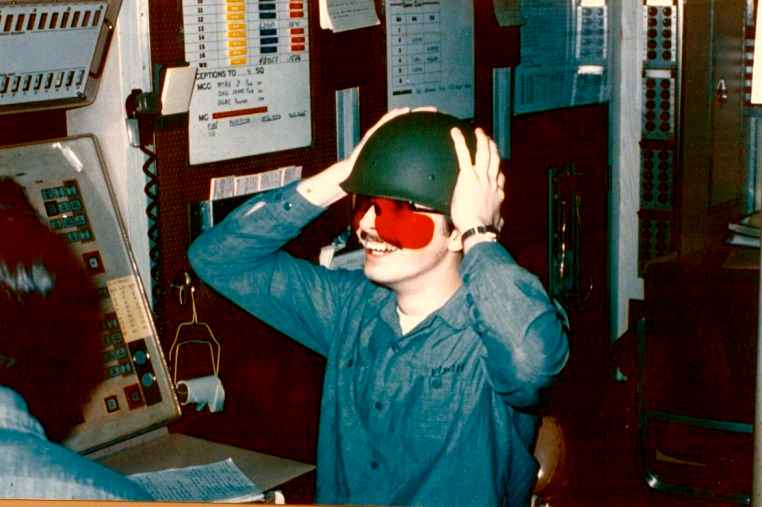 And yet another view of the FCC compartment with a good view as to the crew's tasteful workspace decor.  FTB Larry Kemmer's beard gives the photos timeframe away as being during the 1970's.  Behind the far wall was a storage area that was freezing cold and which, was where our eggs were stored during patrol (photo courtesy of the family of Jack Postell). 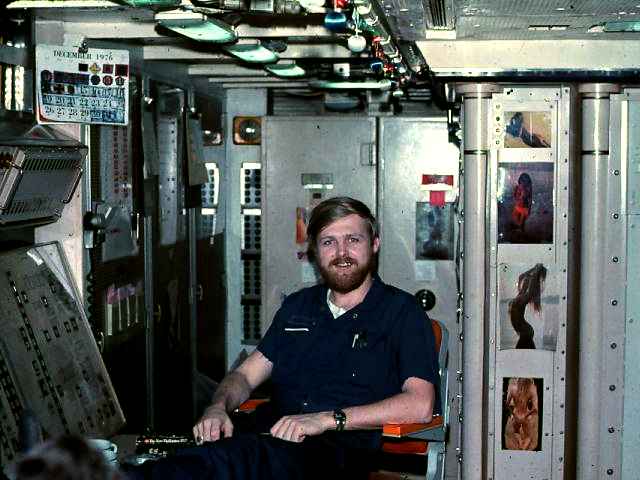 Here is the Port side of the same console and another 1970's view.  The person sleeping is "I-Top" (photo courtesy of Rob Bell). 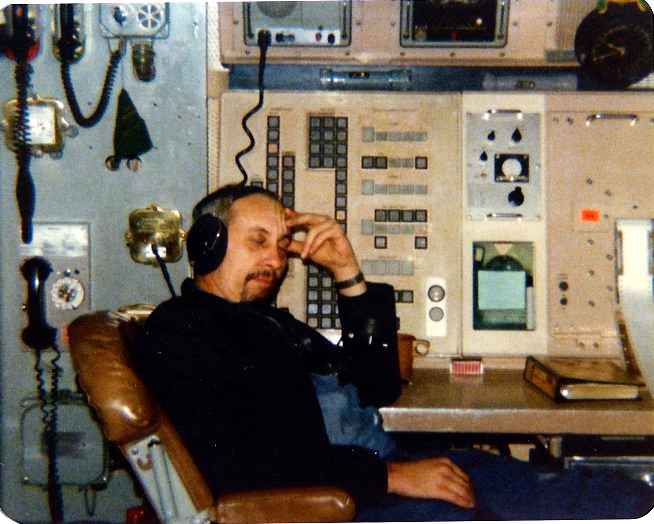 Here is a 1970's photo of the Pulaski's mascot, looking comfortable on the floor of the FCC.  Now did the dog really really go to sea with the crew or did it remain in port?  Inquiring minds want to know (photo courtesy of Rob Bell). 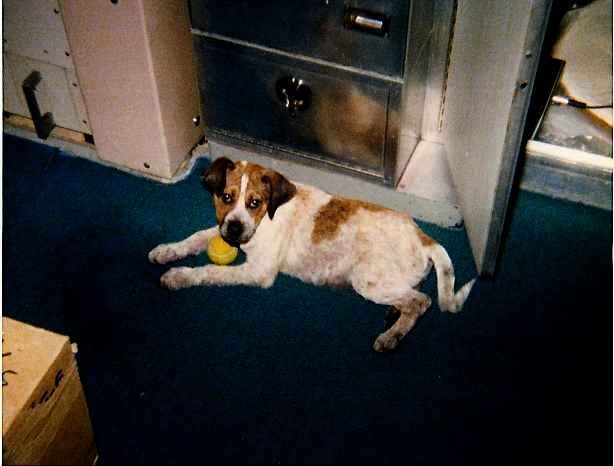 Here's another 1970's photo of the mascot, looking tired from his relaxation.  Most - if not all - submarines had an animal mascot during World War Two and members of the Weapons Department actually approached our Weapons Officer and Executive Officer with a suggestion to have a hamster or gerbil.  I can't remember if it was a joke or if they were serious.  Either way, we never got it (photo courtesy of Rob Bell). 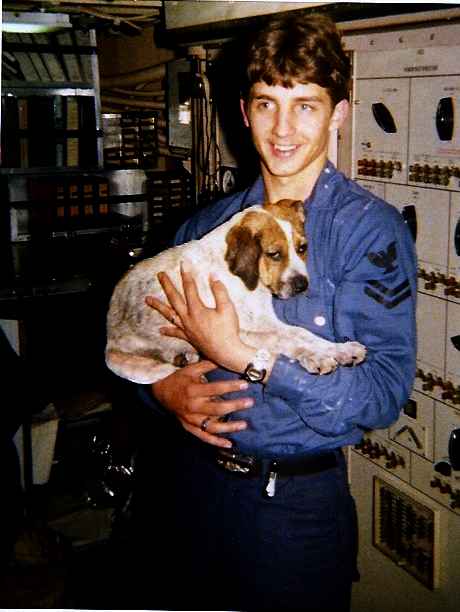 Behind the wall at the end of FCC is the Missile Compartment Lower Level.  Here, the temperature is as cold as it can get, so this is where the crew's exercise machines and weights are located.  There's also temporary berthing for riders and other guests but the normal crew tended to fight for these bunks.  For my first patrol I slept down here.  MT3 Dean Bower and the other Missile Technicians are adjusting something down here. 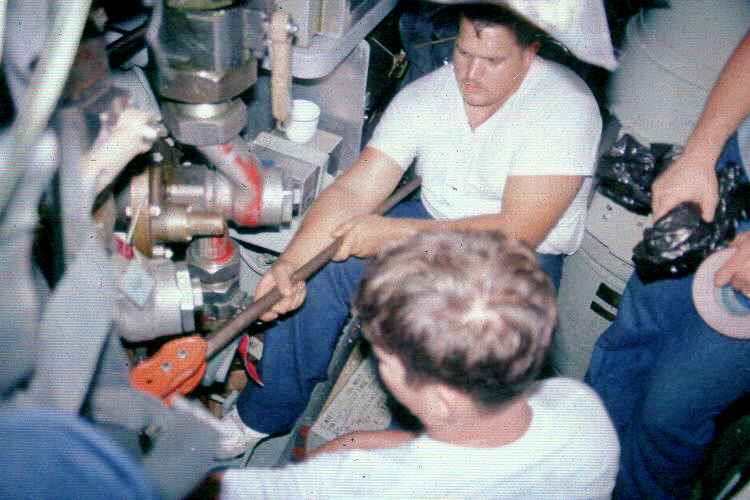 Here's a better view of the missile tubes and the associated wiring involved.  Hammocks and jury rigged beds occupy the outboard of the missile tubes.  The beds cannot be "made" as such, but with the temperature as cold as it was down there, you tended to sleep fully clothed with your coat on.  The ships life jackets, life lines, Jacob's ladder and other topside fittings were stored down here (photo courtesy of Chuck Jensen). 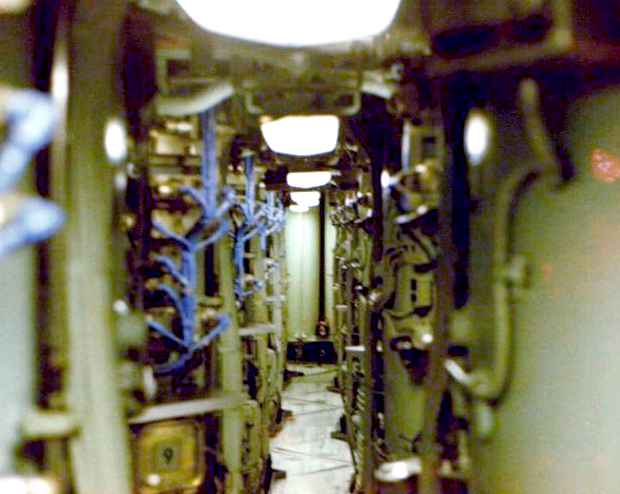 On the other side of the wall is Auxiliary Machinery Room 1 Lower Level which I unfortunately have no photos of.  All of the spare parts live there as well as the Storekeeper's office.  Other miscellaneous gear is stored there as well.  AMR2 Lower Level is where the boat's diesel engine is mounted.  Each boat names their diesel engine.  Pulaski's engine was named "Clara Bell The Hummingbird."  On the hidden side of Clara Bell is a verse written by an un-named sage which goes like this: "long ago, men went to sea on subs named after fish; now fish go to sea on subs named after men."

All four hundred or so feet of Pulaski was accessible by fire hose and by EAB.  We would frequently have EAB races starting in the Torpedo Room and ending up in the lube oil bay.  I know, I know...sick individuals.  And this is as far aft as you can get on the bottom floor of Casimir Pulaski.  Hope you've enjoyed your tour.