Sea trials was a nice little excursion but now it's time to either fix what didn't get repaired properly or because everything was fixed so expertly, liberty time!  The wive's club has been busy.  Even though not married, the girlfriends are included and are looked after with as much care.  A film is being made of everyone's family.  A few minutes here and there, a final goodbye or words of encouragement.  This film will be delivered to the chief of the boat or captain and will be shown on halfway night.  These last few days will be hectic with the boat shuttling back and forth between the tender and the pier for last minute tweaking.  Here, a missile tube gets some last minute maintenance.  To our right you can just see the fairwater plane of USS Atlanta.  She will be our escort in the coming days as we set out for our patrol area. 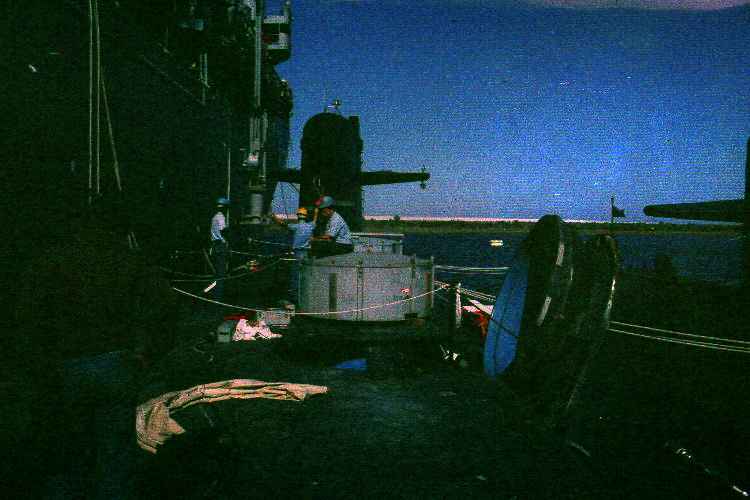 The routine of watch standing is still there.  There will be money to be made as shipmates trade cash for watches - in other words, "stand my watch for me and I'll pay ya!"  On many occasions, I'd stand multiple watches.  Hmmm...  Hey, $20 was a lot of money back in the 1980's!  Here, my off crew neighbor, ET2 Frank Hellenberger and I discuss the merits of watchstanding amid the brutal Georgia heat. 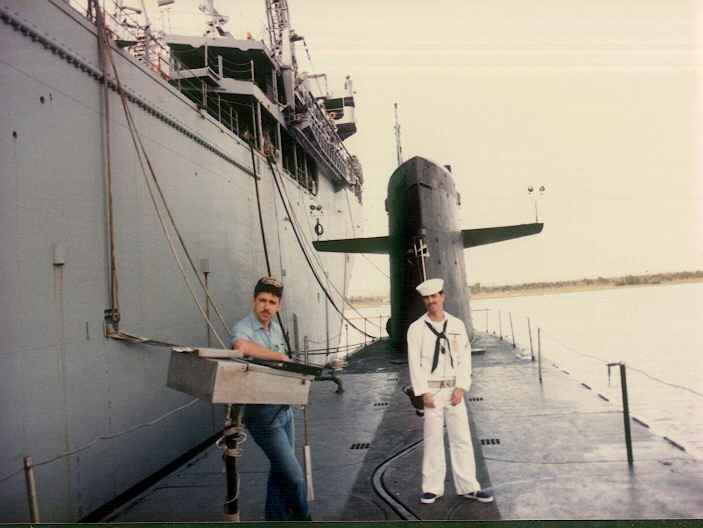 From out of the tender's vast armory comes live torpedo's to replace any exercise shots we were carrying or weapons that were removed for maintenance.  The protective nose cap will be the source of much fun throughout patrol...  The huge MK-48 torpedoes will be lowered down to us by one of the tender's huge king post cranes. 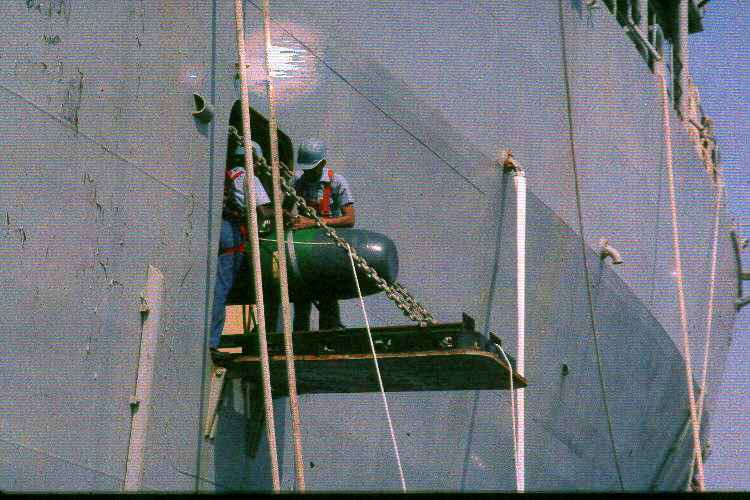 Once safely on the loading cradle, the fish will begin it's entrance via the weapon's loading hatch which is also the forward escape trunk.  The cradle will tip forward and using ropes and a capstan, the fish will be loaded.  Repeat as needed!  Notice the huge garage under construction in the background.  This will be for the huge Ohio Class boomers that are on order, being built and due to replace us.  Each new structure signals that our time is that much closer to running out. 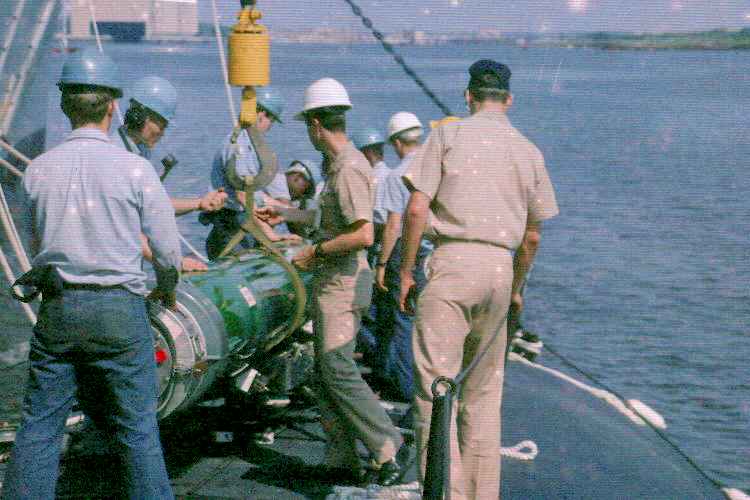 A protective tube cap is adjusted on one of the missile tubes.  This is NOT the missile itself.  This is a waterproof cap which keeps the tube dry until launch.  Notice the ship's wheel marking on the inside of the tube.  This is the symbol for the Quartermaster rating.  Each submarine had it's inside tube hatches decorated differently.  Some boats had all sixteen hatches painted like pool balls.  One even had 1940's Vargas pin-up girls.  Another had replicas of the ship's patches for all the boats in the squadron. 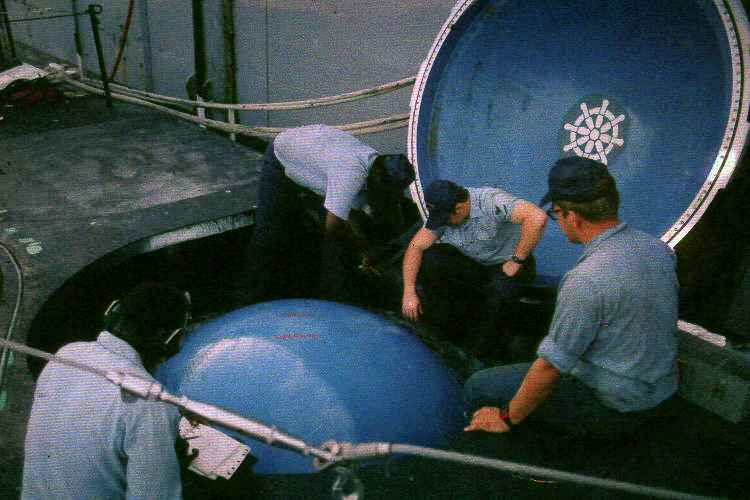 Every so often you get treated to a very rare sight indeed - the tender getting underway!  Every now and then, they drop lines and go to sea for a few days just to make sure they still know how to sail and act like real sailors!  It truly is amazing to see something that big crank up it's engines and start moving slowly at first, then picking up speed. 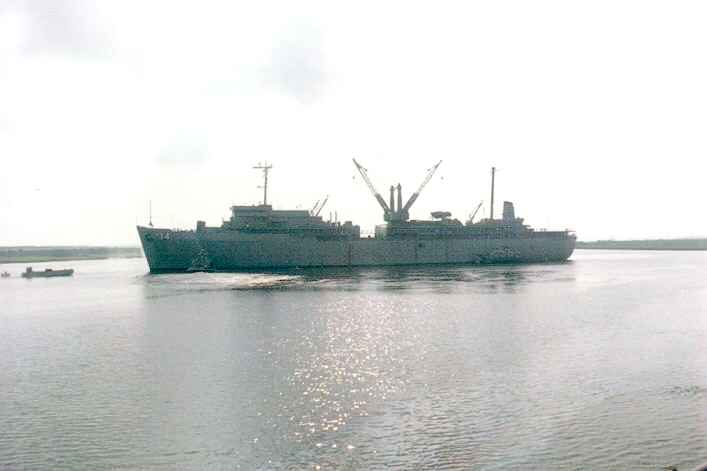 During the 1980's female sailors were a novelty so the presence of them on board the tender caused many to dub the ship, "The Loveboat."  At the time, non-combatants (service vessels) were the only vessels females could serve on.  With her "arduous" three day cruise over, the tender returns home to King's Bay. 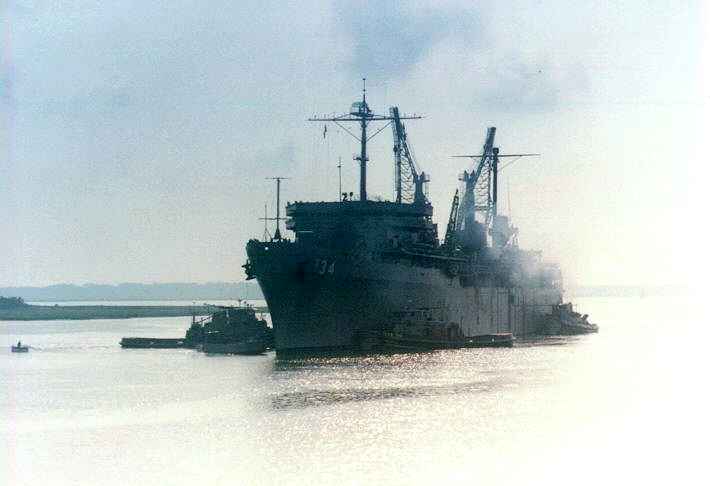 And she gets put right back in the same place that she was tied up to a few days ago.  The base looked deserted with her gone, so it's kind of comforting in a way to see that big grey shape back again.  Subs will then be reassigned to either the Port or Starboard side of the newly returned USS Canopus. 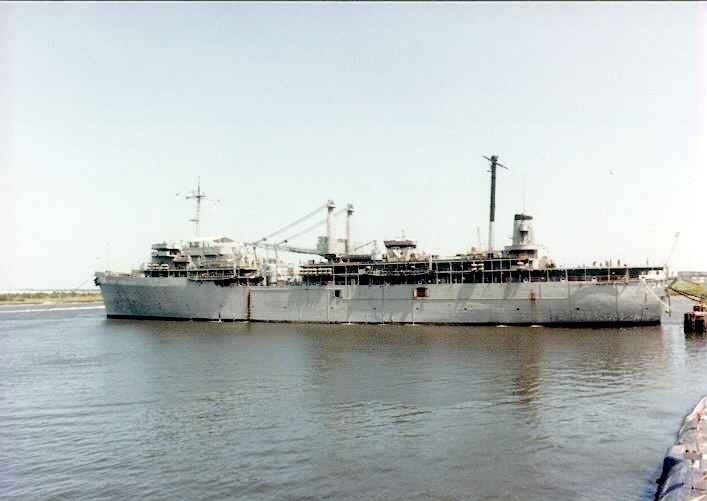 The last night before patrol starts.  Most are in hotel rooms with loved ones or at the phone booth talking with loved ones who couldn't make the trip.  Those who had duty normally sneaked loved one's onboard.  The key to sick bay was a prized possession on those nights!  The structure hanging over our stern holds assorted cables and hoses. 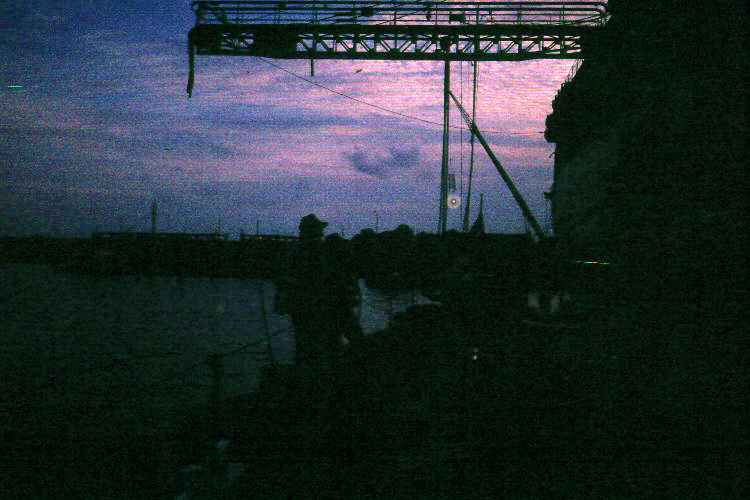 Daylight!  All women and kids off the boat NOW!  The brow (gang plank) is gone, the captain has his Navy issue brown sweater on (itchy and scratchy) and the tug nudges us into the right position.  The pilot is waiting outside the harbor area to lead us out.  Topside crew is making preparations to start breaking down cleats, safety lines and drop all main lines.  The flying bridge is installed and one lucky soul will get to be topside lookout for the outboard voyage.  Of course the ship's photographer has run of the boat, which turned out to be a bonus.  Gee...wonder if he thought that one out beforehand? 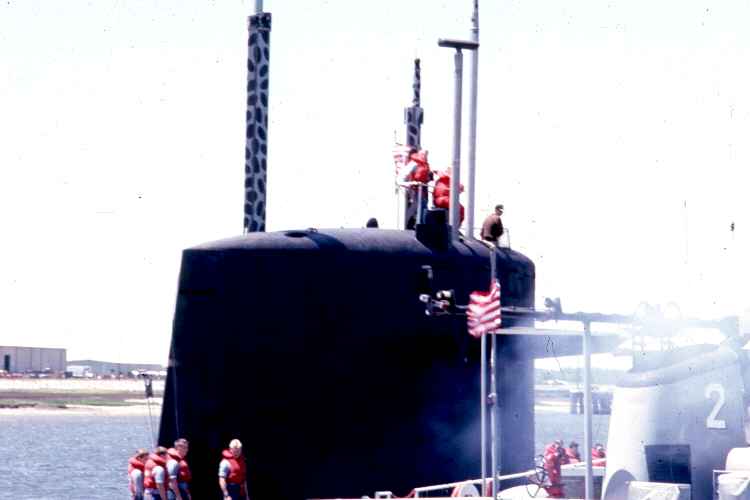 We are outta here!  Patrol area here we come!  Well, admittedly, we aren't THAT happy...but for the sake of this story, we'll pretend we are.  The tug is gone and we're passing the outer limits of the base.  Soon we'll be navigating the Georgia/Florida coastal areas and after an hour or two, we'll be in the Atlantic.  Our little brother is already out there ahead of us.  Any snoopers have been chased away.  Overhead, Jacksonville based P-3 Orion aircraft continue to keep the area sterile for us. 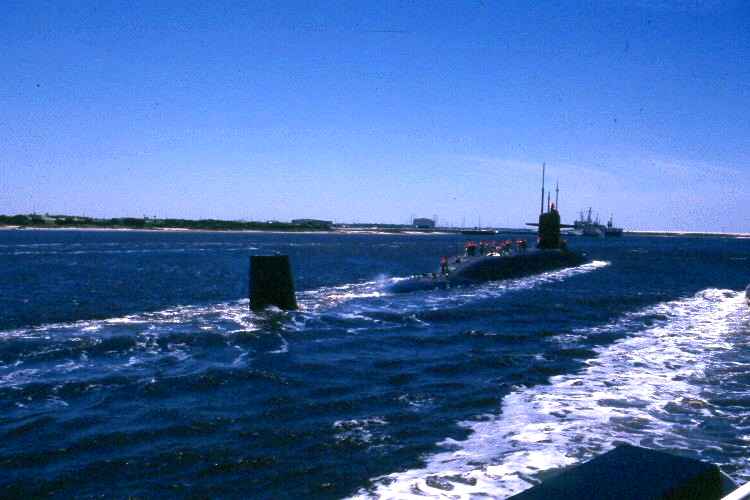 Wow!  Look who drew the lucky straw!  Me as lookout!  Cool!  The captain's busy looking at his guages and talking to the pilot.  The junior officer who will relieve him is busy studying the charts.  Me?  Just chillin' and watching the water and scanning the sky.  With the bridge as crowded as it is prior to diving, there will be dozens of pairs of eyes to scan the horizon. 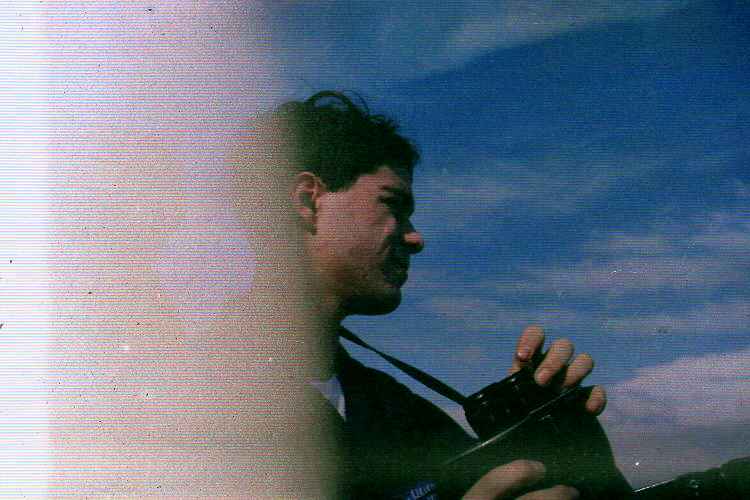 After navigating out of the channel, we nose our way out towards open sea.  Our pilot is still with us and constantly monitors our progress to make sure we're where the charts say we are.  The inland water way will soon lead to open ocean and then we'll be more methodical in our positioning and bearings. 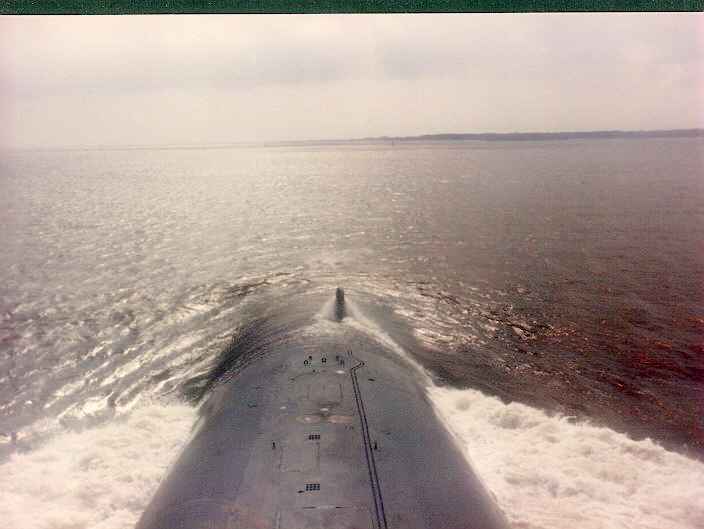 The relief topside watch stations itself and I get to trade binoculars for a camera.  Not a bad trade as I can come and go from the sail as I please now.  FN David Groves looks thrilled to bits as he takes my life jack and binoculars.  Contrary to popular belief, the binoculars are not World War Two issue, though a few stories circulated at the time of war vintage glasses being in the fleet. 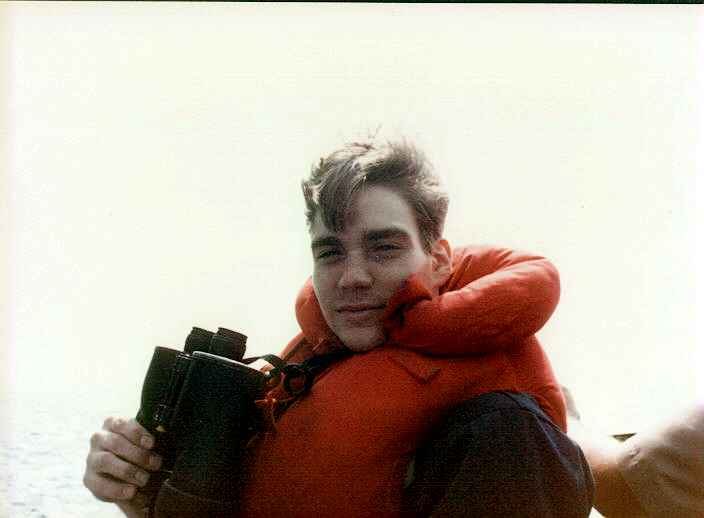 As we are still on the surface, every effort is made to minimize our detection.  Note the civilian navigational radar mounted on top of one of our masts.  Any hostile surveillance vessel watching the ocean for American Navy traffic will ignore the civilian signal.  A riding officer, ENS Buffington is the Officer Of The Deck (OOD) with FN Groves as lookout. 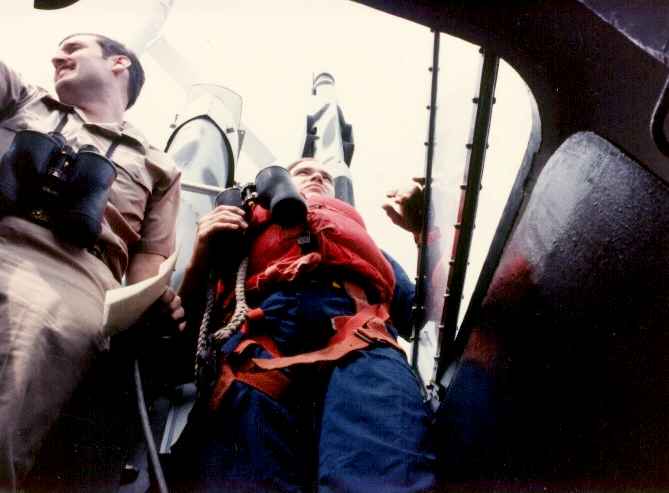 And here come the first of the many hungry dolphins that will follow us until we reach our diving position.  Small fins at first, then the rest of the friendly animals.  We're out in the open ocean now.  Soon, the captain will tell the officer of the deck to "dive the boat" and we'll head to our cruising depth and continue on towards our patrol area. 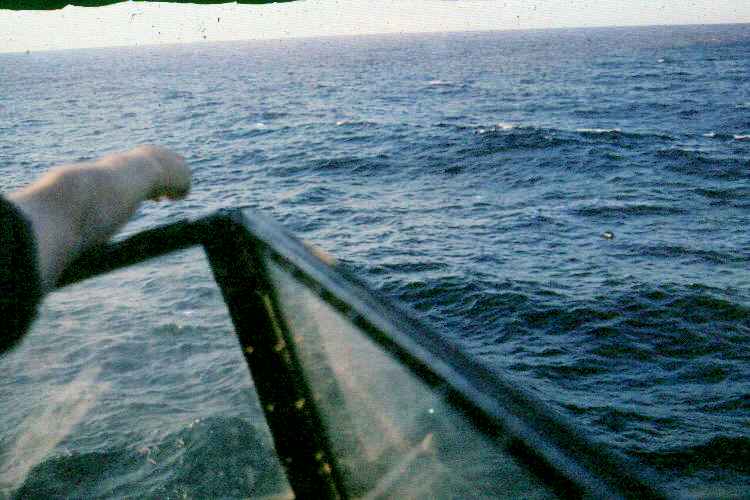