The dive point approaches and at this point, sonar has been tracking our noise signature to spot any tell tale problems.  In addition, our area has been scoured by our escorting SSN.  And as if untrusting of their work, NAS Jacksonville based P-3 Orion sub hunting planes sweep the area as well with MAD booms and sono-buoys. 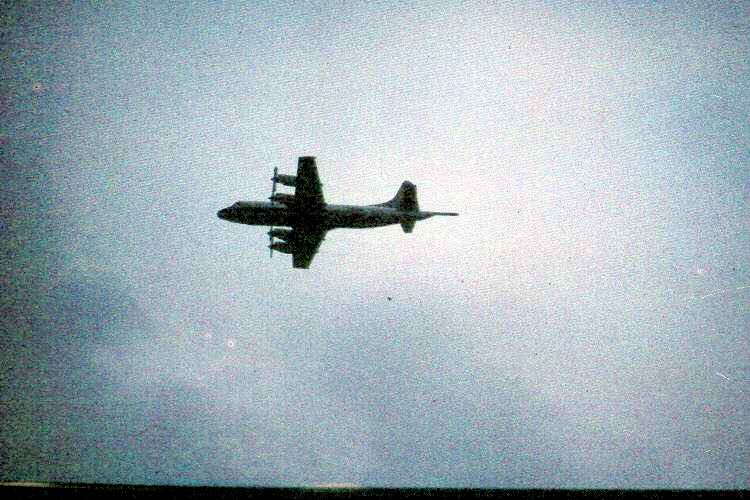 Submarines by nature of their metal hulls, create a magnetism that can be detected by air.  The actual depth that a submarine has to travel to avoid detection is classified, but suffice to say that the P-3 Orions used the boom in their tail for such a purpose.  Once the detector in the tail boom showed no contacts, the plane made one more pass to drop a sono-buoy or two.  These active sonar equipped devices would ping the area to verify that it was indeed truly empty. 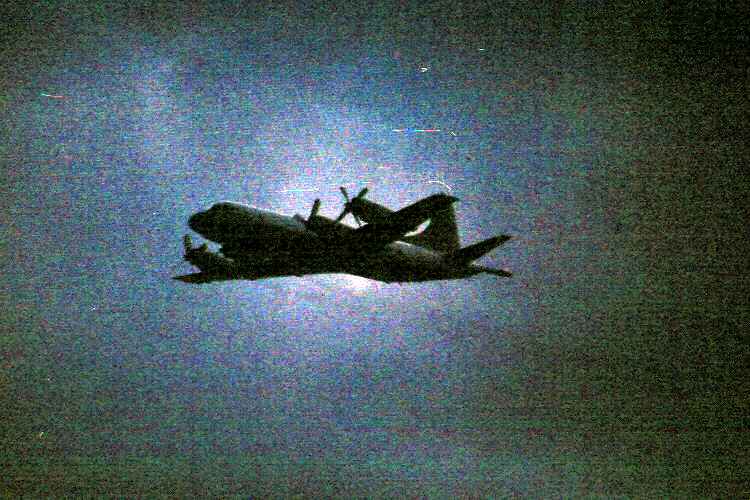 Once the Orions and other units are secure that the area is "clean" the order is given to "dive the boat."  As we reach our patrol area we will settle into a pre-determined depth and cruise at a pre-determined speed.  And then the drills start.  The drills test everything from flooding, fire-fighting, a reactor disaster and of course, the actual firing of nuclear missiles.  This is actually a calculated process and differs from that used by the US Air Force in the release of their nuclear weapons.  Upon receiving the order to fire, this order is then validated.  If the order is deemed "authentic" then battle stations missile is started and all hands prepare to carry out the order.  The order will normally state how many missiles to be fired and where they're going.  The boat then slows or speeds up to the pre-determined speed and ascends or descends to the pre-determined depth.  The boat then hovers to provide a steady platform.  A form of GPS is in place which tells the missiles where the boat is.  The captain then initiates the launch process by inserting his "key" into the box in the control room.  At that stage, the Missile Technicians are free to open the necessary hatch/hatches and turn on the necessary missile generators.  Once the missile is "spun up" and the relevant hatch open, the countdown starts and the firing is turned over to the fire control center (FCC) in the lower level of the Operations compartment.  At this time, the firing is a moot point.  It's out of everyone's control.  The double safes holding the physical trigger are there.  And after entering the necessary combinations, the safe is opened and the trigger removed.  At the moment the trigger is pulled, the boat shudders as the blue protective cap is broken and the missile leaves in a bubble of gas.  Upon breaking the surface, the missile engine ignites and it heads towards it's target or targets. 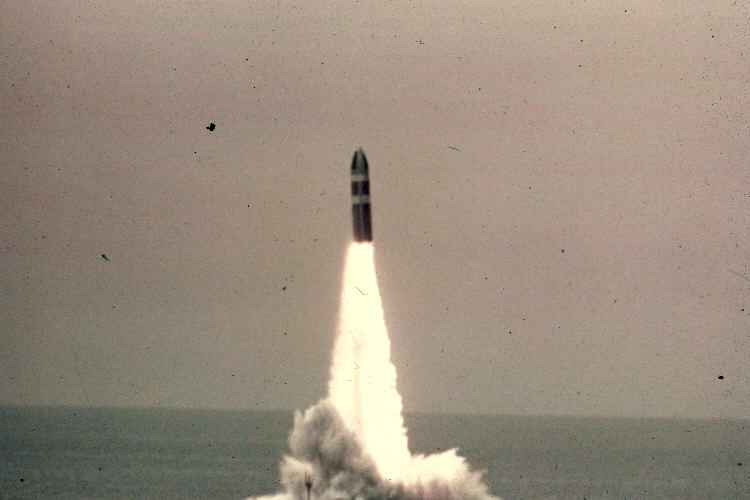 The reality is that more often than not, when the trigger is pulled, the missiles stay put.  The order was merely a drill.  A test.  These tests ensure that the weapon system and the crew are operating at peak efficiency.  This ensures that should push come to shove, the SSBN and it's sisters on patrol in other parts of the world's oceans, are able to shove the hardest.  Maintaining communications is paramount to ensuring that orders to fire or not to fire are received at the period prescribed.  Since 1946 no atomic or nuclear weapon has ever been launched in anger at another nation by the United States of America nor has one ever been launched in anger at her.  This is due to the stunning offensive power of the US Navy's SSBN fleet.  Bombers require airfields.  And then, once airborne, a plane has to transit to the target area and hopefully not get shot down.  Land based missile silos are easy targets; they cannot move.  An SSBN on the other hand travels underwater, it's location known by no one.  Not even the president knows the location of each SSBN.  He knows which ones are at sea, but not WHERE they are.  No one knows if an SSBN is closeby.  This puts the sword of justice and retribution hanging over the head of potential adversaries.  Key to the success of the mission is communications.  And sometimes that radio equipment breaks.  Here, Pat King prepares to go topside to repair some broken radio equipment (photo courtesy of Pat King). 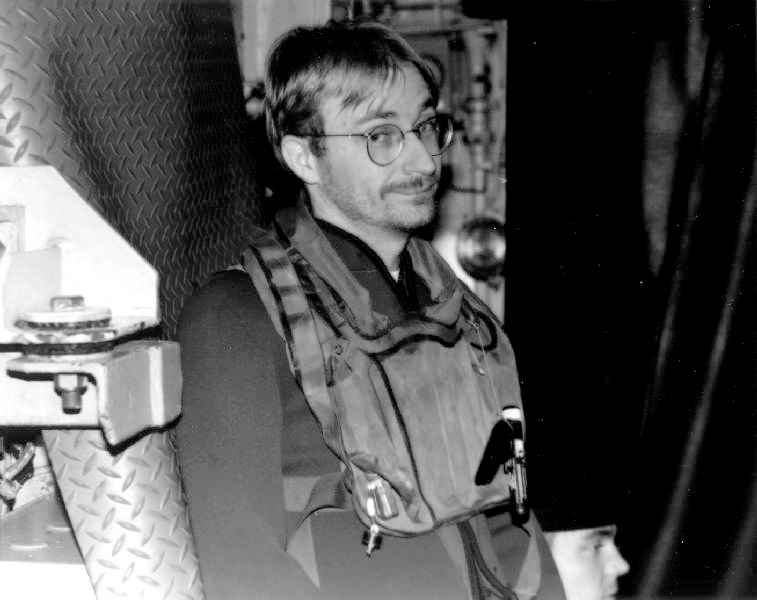 Back from his trip topside and just a little wetter for the wear.  The boat is a self contained unit and all repairs must be made by us to the best of our ability.  Failure to fix a piece of vital radio gear results in a cancellation of the patrol as we must be able to receive launch messages or messages telling us not to launch (photo courtesy of Pat King). 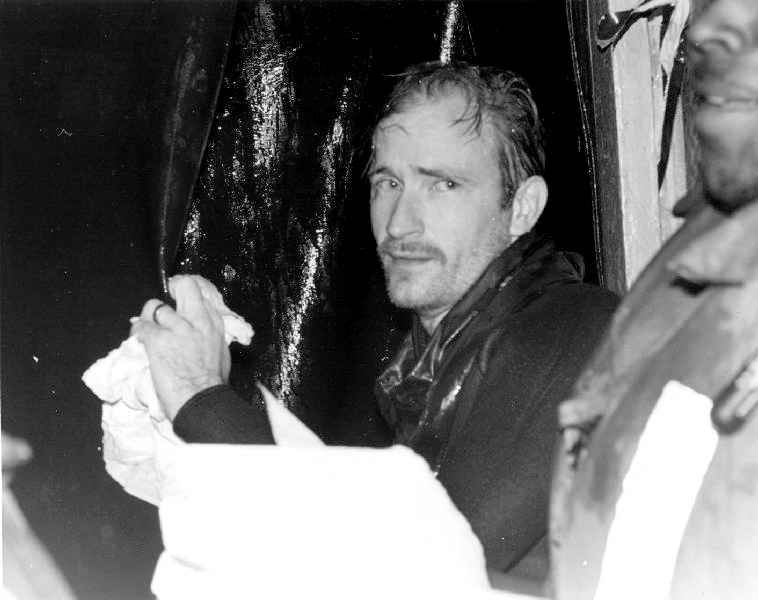