Welcome To The Photo Page

Here you'll find some photographs of USS Casimir Pulaski taken by me during my tenure as Ship's Photographer and hopefully these photographs will be joined by photographs from other crewmembers.  I do not mind if you download them or reprint them for your use (unless noted) but do not link to this website.  Take the photo!

The Pulaski tied up alongside submarine tender USS Canopus (AS 34) in Kings Bay, Georgia.  The railing and scaffolding on the sail is for maintenance purposes; either work to the masts and antennas or just other maintenance requirements.  Notice the submarine is absent of all markings and other identification except for a lone white E which signifies her receipt of the Battle Efficiency Award for submarine squadron SIXTEEN.  Screwed in to the end of the Port fairwater plane are a pair of anti-swimmer lights.  There is an open hatch at the front end of the sail which leads directly to the control room.  There is a flagstaff on the back edge of the sail which signifies that maintenance is being done aft where the flag is normally flown.  Note the access hatch outlines on the deck as well as the pattern of the safety tracks.  The white girder running vertically on the side of the submarine is a lock to keep the BST buoy doors closed.  The buoy is under high pressure and could cause a fatality if accidentally launched.

Algae growth along the waterline.  This view shows just how much of a submarine is actually invisible under water.  Two of the torpedo muzzle doors are visible. Security is paramount on any submarine and ours was no exception.  The base itself had the traditional upper and lower base and there were numerous checkpoints to go through before one reached the boats.  Then, assuming one got there, you had four watch standers to deal with.  The sail sentry was the most deadly with his 7.62mm M-14 rifle.  He commanded the view of the entire boat and pier and could pick you off in next to no time.  This isn't a cheesy 9 mm pistol round...this is serious firepower.  Crew working on sail items relax while the sail sentry makes his rounds.  The deck crew is made up of QM3 Scott Sleeper, QM3 Robert Gardner, FN Lamont, TM3 Dorsey and FN Groves.  MM3 Troy Akins is the sentry. 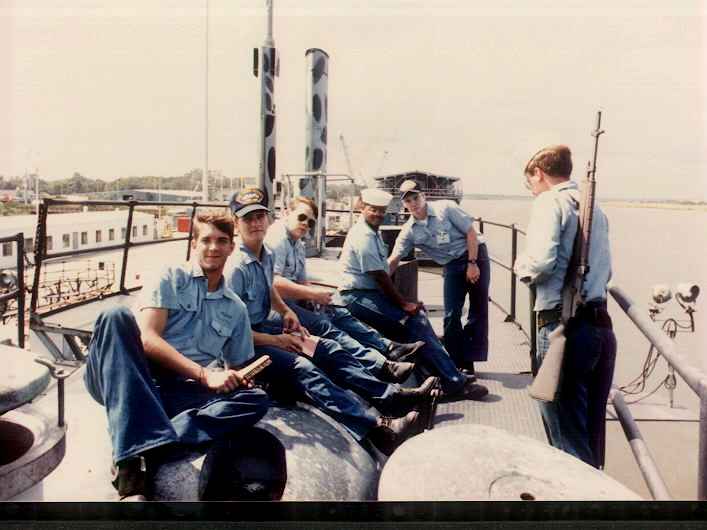 If the sail sentry's aim was bad, then there was the roving sentry, armed with the trusty Remington 870 combat shotgun.  Some boats had the folding stock variant but no matter whether yours looked modern or antique, the 870 could do some damage.  Here, IC2 Rusty Clark has the watch. 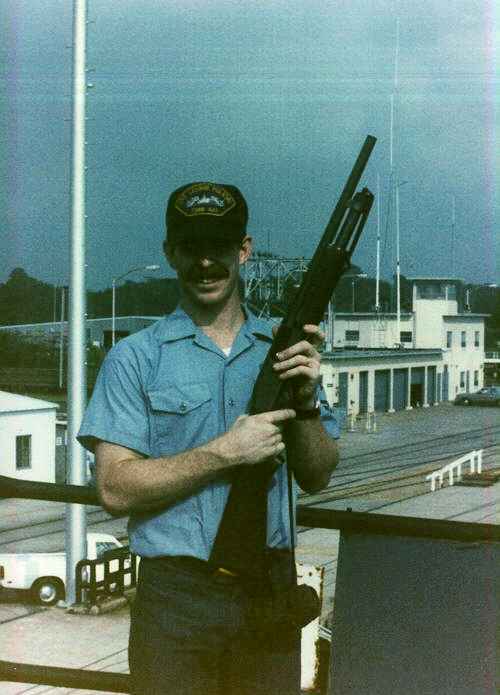 On the deck itself, the Topside Petty Officer and Topside Sentry not only controlled access to and from the boat but check the vital conditions of the boat, like draught and whether there were any leaks.  Armed with the trusty M-1911A "Colt 45" pistol the Topside Petty Officer was normally dressed in a dress uniform.  The silver box contains communications gear to Control plus a drawer for the access list to get on the boat. 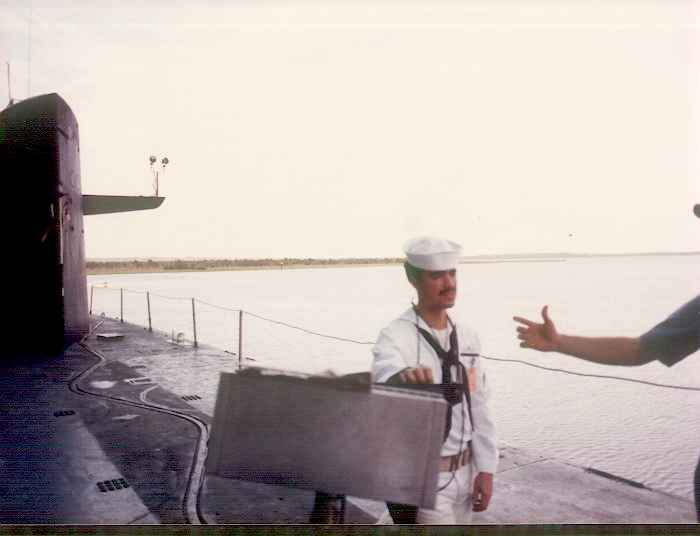 Pierside for maintenance.  At the time, the tender, USS Canopus was the Naval Submarine Base, Kings Bay, Georgia.  So with the tender being the sole maintenance facility, workshop, etc, it was imperative that non-tender intensive maintenance be done pierside.  So with that in mind, Pulaski has left the tenders side to make room for up to two other SSBNs.  Note the bridge aft for shore power cables to sit on.  Also note that the flag is flying aft.  Just past the brow (gang plank) there is a black davit for loading supplies down the Auxilliarly Machinery Room 1 access hatch.  The dome shaped tent over the open missile tube signifies an empty tube and served both as a safety fence and a cover to prevent prying eyes and as a sun shade for crew working on the tube's innards.  Model builders; note the absence of safety railings on Pulaski's deck. 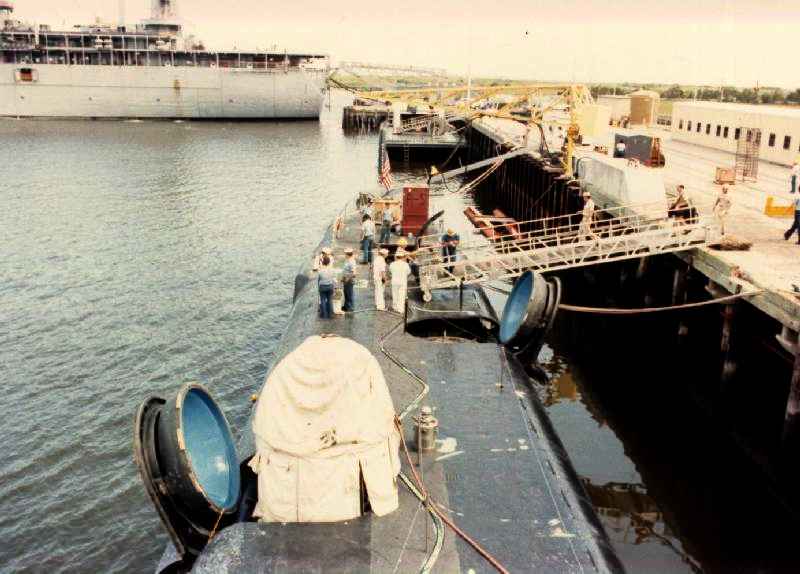 Missile Load!  The loading and unloading of missiles is always a sight that defies imagination.  It's hard to believe that inside that canister is a weapon capable of destroying a whole nation.  Pulaski's missiles (and those of her sister boats) were maintained to the highest degree to ensure that if the message were ever received to launch, the missiles would perform as intended. 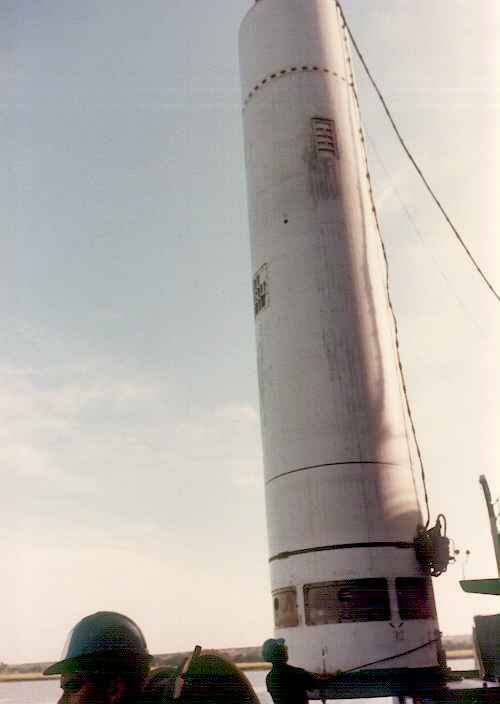 Just as important as the missiles are the self-defense weapons carried by Pulaski - her load of MK-48 torpedoes.  Here, a Navy landing craft impressed into service as a lighter, carries torpedoes from either the weapons wharf or the tender herself, to Pulaski. 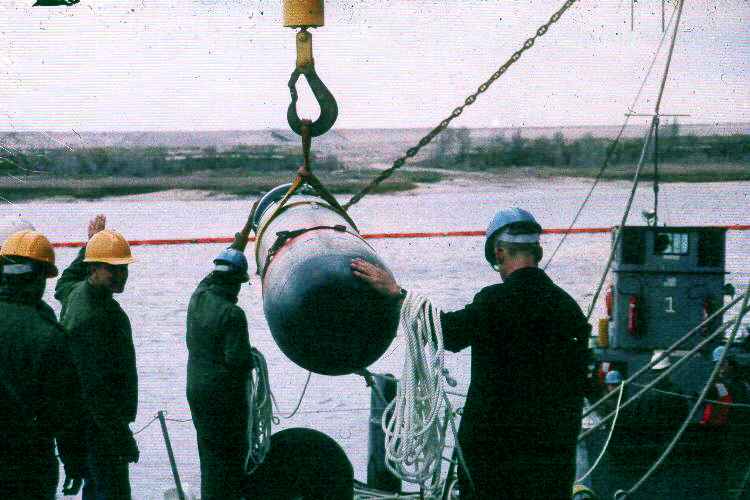 Time for a drink after work at one of King's Bays many clubs.  Even if you didn't drink, the comfortable furniture and the fact that there was no "submarine smell" meant that you ended up in the club anyway. 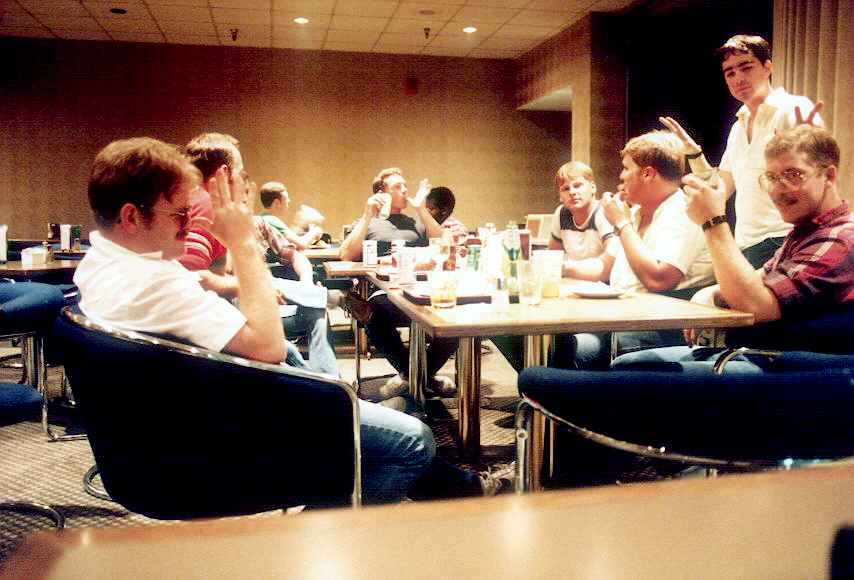 Like all submarines, everyone has more than one assigned task.  During a not so nice coup d'etat, I weasled my way into being ship's photographer.  This was solely for the advantage of being able to come and go topside during piloting, which is a blast.  When I took over the job, the Pulaski was equipped with a WW2 vintage Topcon 35mm SLR and numerous lenses.  The camera itself was crap, but it remained in service because of the mounting bracket - specially made by Topcon - which enabled the camera to be attached to the periscopes.  The Captain was suitably impressed enough with my talent to start asking for more detailed, advanced shots.  Stuff that was possible with the Topcon, but required more work.  I broached the subject of another camera and the Captain signed a purchase order request without hesitation.  Carrying my treasure in hand, I marched to the squadron disbursing office only to be told that the camera could only be replaced by Topcon as they, and they alone were the only camera brand with a mounting bracket suitable for submarine use.  Undaunted, I phoned around and found a camera store willing to take a stab at it.  They were able to make a bracket to fit any camera, including my trusty Olympus OM-1N.  But because the ship "needed" a new camera, the bracket would have to fit it's replacement.  They recommended a titanium body Nikon F-1 which completely infuriated me (severe sarcasm...) but I pledged that I would "work with it" and see "if I liked it."

Due to the absence of any light proof rooms, an attempt had been made to seal off the Nucleonics Lab with blankets and use that as a dark room.  Enter trusty Kodak C-41 processor and fixer and all the other chemicals.  Problem is...it's black and white.  The Captain wanted color.  We discussed it for a while and I was again commissioned to find a solution.  The solution was Poloroid's new instant slide film.  It was 35mm and came in a normal 35mm cartridge.  Once all 24 photographs were taken, you removed the cartridge and placed it in a special housing that had held the cartridge plus a spot for a developer cartridge.  Once loaded, you turned a crank (incredibly high tech!) which pulled the film through the developer and then when done, you reset the cranks path (like a socket) and turned the crank the other way to pull the film back into the cartridge.  After sitting for two minutes, voila' - instant negatives.  Then you would cut them and place them in the special snapping slide frames.  The Captain was over the moon. The bulk of the remaining photographs were developed by the photo lab onboard the tender USS Canopus once we pulled back in to port.

Time has not been kind to the Poloroid slide film and some degradation has occurred.  I first became concerned when - as the only family member with a slide projector - I received the family slides and started noticing the condition of some of them as well.  Pulaski's slides were in relatively good condition but the Poloroid ones show gross destruction and deterioration and the results on this site are as good as can be gotten unfortunately.  The C-41 process slides have lasted considerably longer and look better.  Oh to go back in time with a digital camera and a large memory card...

These photographs, courtesy of shipmate Richard Van Remmen, document the last days of the USS Casimir Pulaski and may very well be the last photographs taken of her when she was a frontline naval warship.  Here is Pulaski being eased towards the new dry dock by tugboat. 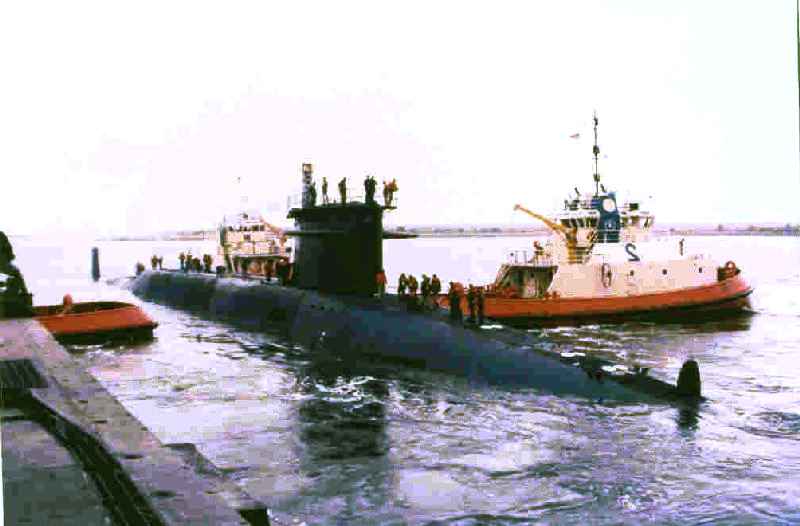 Pulaski enters the narrow channel at the entrance to the new dry dock.  Unlike the floating dry docks, incliment weather conditions do not affect dry dock operations at the new facilities.  Resembling huge garages, these structures are state of the art. 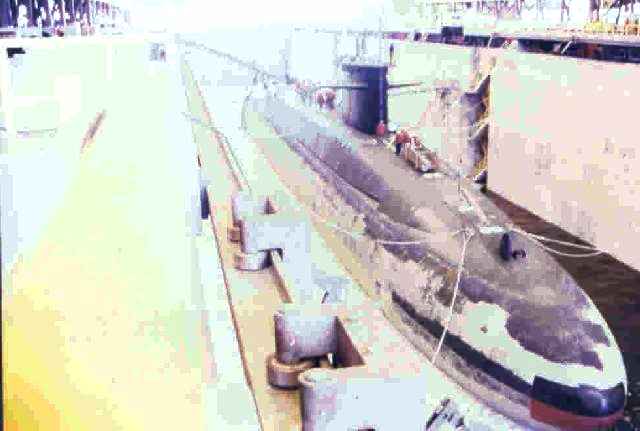 Sunlight bathes Pulaski as she fills the entranceway.  The topside crew have, by now, fastened all lines and rigged out the bull nose and capstan for the docking process. 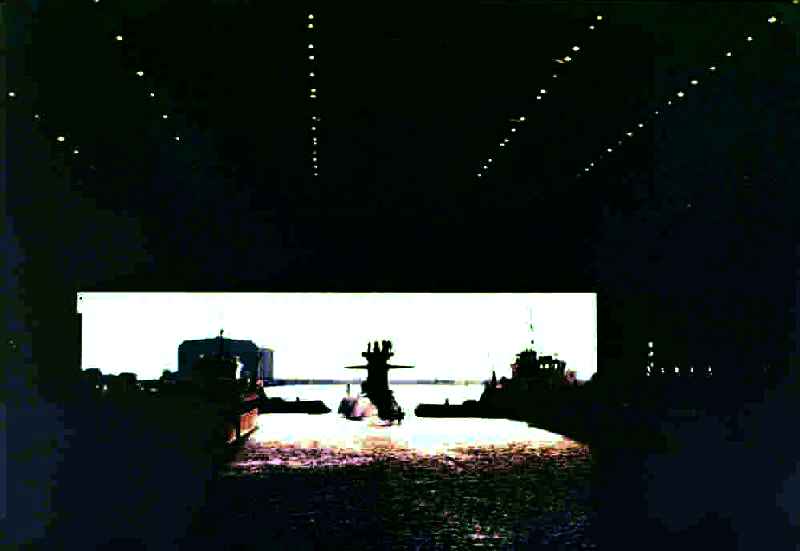 Once inside, the rear dock door closes and the facility begins the process of draining the water.  Divers are already underwater making sure she sits squarely on the carefully positioned rests. 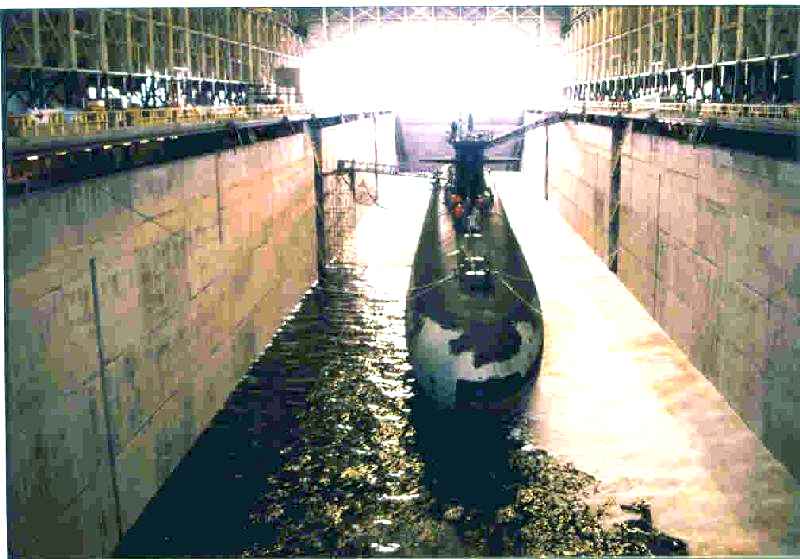 Almost finished pumping and then the boat's crew, dry dock workers and other staff can commence whatever repair work or examinations that have been scheduled. 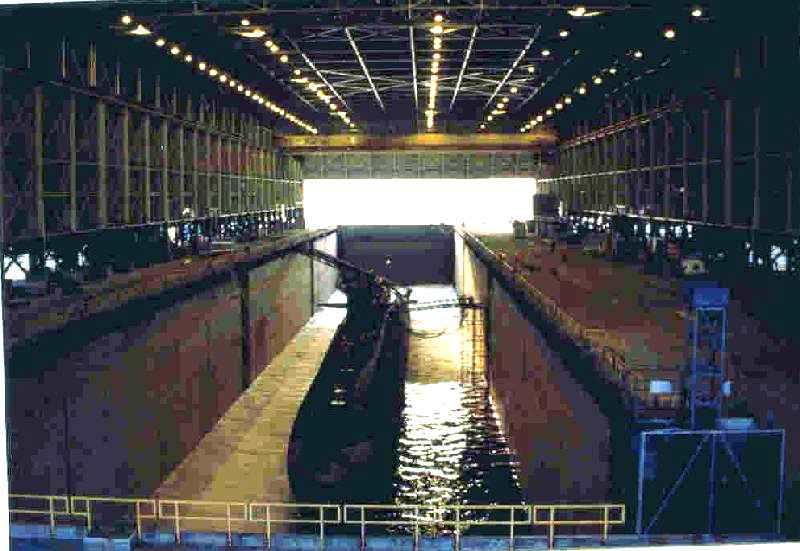 A view looking forward with the other end of the dock visible. 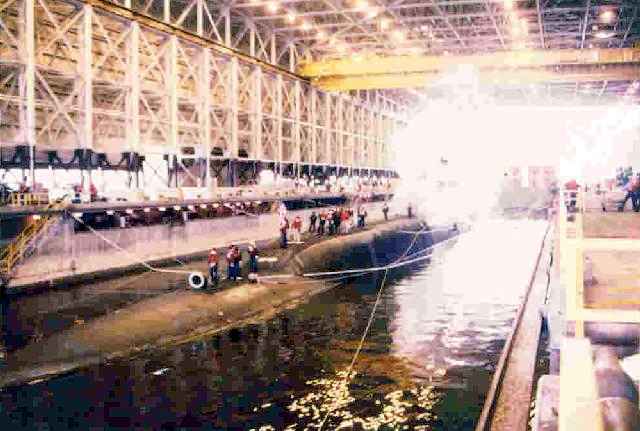 Repair work commences in earnest.  The Cold War's ending has not been fully appreciated just yet and the time table for deterrent patrols still has to be met. 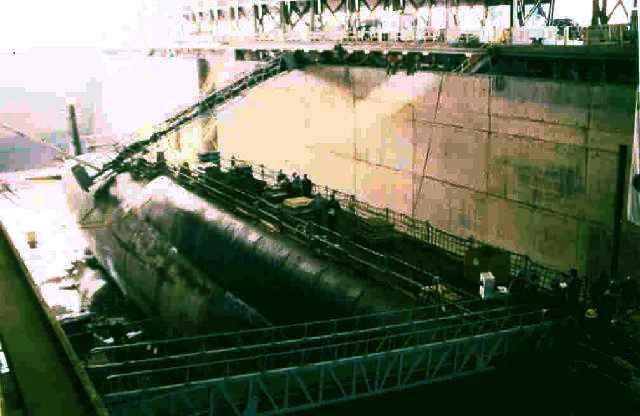 Here's a shot of Richard at the helm at some point during his tour onboard the Pulaski.  The aparatus to his right is equipment for reading the ocean's temperature (thermal layers). 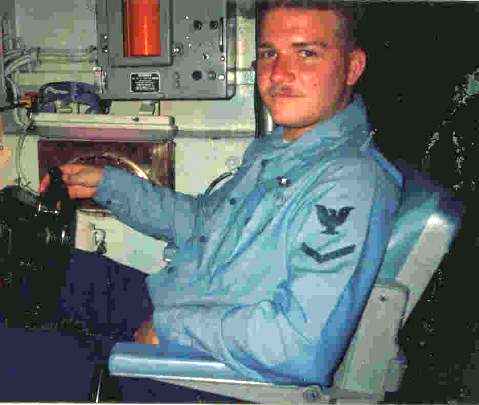